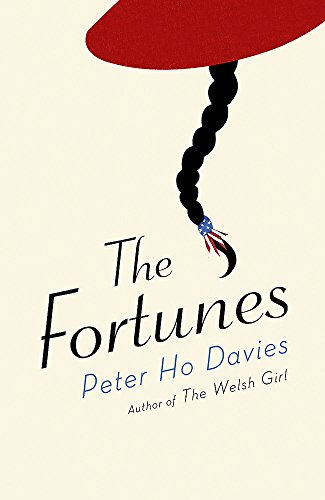 The Fortunes
by Peter Ho Davies

In Stock
£2.99
By the author of the Booker longlisted The Welsh Girl, a vibrant, powerful and iconoclastic novel telling the little-known story of the Chinese in America, and of America through its Chinese.
Very Good
Only 1 left

The Fortunes by Peter Ho Davies

Ah Ling: son of a prostitute and a white 'ghost', dispatched from Hong Kong as a boy to make his way alone in 1860s California.

Vincent Chin: killed by a pair of Detroit auto workers in 1982 simply for looking Japanese.

Inspired by three figures who lived at pivotal moments in Chinese-American history, and drawing on his own mixed-race experience, Peter Ho Davies plunges us into what it is like to feel, and be treated, like a foreigner in the country you call home.

Ranging from the mouth of the Pearl River to the land of golden opportunity, this remarkable novel spans 150 years to tell a tale of familial bonds denied and fragmented, of tenacity and pride, of prejudice and the universal need to belong.

A poignant, cascading four-part novel about being Asian and western, about immigrants and natives, about belonging in a country and one's skin . . . outstanding. -- David Mitchell * Summer Reads, Guardian *
Davies pursues his overarching themes of identity and belonging with empathy and wit, repeatedly minting finely judged images that, in a novel not short on flair, arrest and dazzle. -- Stephanie Cross * Daily Mail *
An absorbing, thrillingly serious read -- Alex Clark * Guardian *
The non-European American immigrant experience is rich fictional territory that has been mined by some fine writers (Chimamanda Ngozi Adichie, Jhumpa Lahiri, Julie Otsuka) and Ho Davies is absolutely their equal. It is hard to imagine a novelist more alive to the layered ironies of national identity -- Claire Lowdon * Sunday Times *
Davies captures historical detail in exacting, immersive prose, with the confidence of an eyewitness . . . By uniting an ambitious range of characters, eras and styles, Davies highlights their commonalities, and the subtle, insidious persistence of history . . . It is unreasonable to expect one book to capture the breadth of a radicalized experience - as a historical construction and an everyday fact, as a source of both community and alienation, as a minor annoyance and a moral threat, as a matter of perception and of identification, its diversity and singularity - but The Fortunes has come astonishingly close. It should take its place as a seminal, defining text on the Chinese-American experience. -- Kim Fu * TLS *
Davies's first novel, The Welsh Girl was longlisted for the Man Booker Prize, and he was adjudged one of Granta's Best Young British Novelists. The Fortunes is an equally beguiling book, and should do much to strengthen Davies's reputation. -- Mario Reading * Spectator *
Each novella-length section stands on its own, lending weight and substance to a superbly crafted whole. -- Alastair Mabbott * Sunday Herald *
The book's scope is impressive, but what's even more staggering is the utter intimacy and honesty of each character's introspection. More extraordinary still is the depth and the texture created by the juxtaposition of different eras . . . a brilliant, absorbing masterpiece. * Publishers Weekly *
Only a writer as gifted as Peter Ho Davies could capture the full weight of a century's history with such an extraordinary lightness of touch . . . Buoyant yet profound, unsentimental yet affecting, and above all beautifully written, The Fortunes reimagines in thrilling ways what the multi-generational immigrant novel can be. * Sarah Shun-lien Bynum *

Peter Ho Davies's novel THE WELSH GIRL was published by Sceptre in 2007, when it was longlisted for the Man Booker Prize. It was also a Richard & Judy Book Club choice and was shortlisted for the R & J Best Read at the British Book Awards. His first short story collection, THE UGLIEST HOUSE IN THE WORLD (1997), won the John Llewellyn Rhys Prize and the PEN/Macmillan Prize, while his second, EQUAL LOVE (2000), was a finalist for the Los Angeles Times Book Prize and a New York Times Notable Book. In 2003 , he was chosen as one of Granta's Best of Young British Novelists and was a recipient of the PEN/Malamud Award in 2008.

Born in Britain to Welsh and Chinese parents, Davies now lives in the US, where he is a Professor of Creative Writing at the University of Michigan. He is married with one son.

GOR008580731
The Fortunes by Peter Ho Davies
Peter Ho Davies
Used - Very Good
Paperback
Hodder & Stoughton General Division
2016-08-25
288
0340980249
9780340980248
N/A
Book picture is for illustrative purposes only, actual binding, cover or edition may vary.
This is a used book - there is no escaping the fact it has been read by someone else and it will show signs of wear and previous use. Overall we expect it to be in very good condition, but if you are not entirely satisfied please get in touch with us.