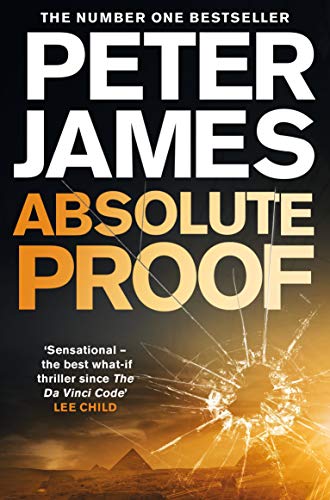 From the number one bestselling author, Peter James, comes an explosive standalone thriller for fans of Dan Brown that will grip you and won't let go until the very last page.

Investigative reporter Ross Hunter nearly didn't answer the phone call that would change his life - and possibly the world - for ever.

`I'd just like to assure you I'm not a nutcase, Mr Hunter. My name is Dr Harry F. Cook. I know this is going to sound strange, but I've recently been given absolute proof of God's existence - and I've been advised there is a writer, a respected journalist called Ross Hunter, who could help me to get taken seriously.'

What would it take to prove the existence of God? And what would be the consequences?

This question and its answer lie at the heart of Absolute Proof, an international thriller from bestselling author Peter James.

The false faith of a billionaire evangelist, the life's work of a famous atheist, and the credibility of each of the world's major religions are all under threat. If Ross Hunter can survive long enough to present the evidence . . .

Sensational - the best what-if thriller since The Da Vinci Code -- Lee Child
We are in Dan Brown blockbuster territory, but both atheists and believers will find food for thought in this globe-trotting epic * Guardian *
The king of crime is now a miracle worker * Sunday Express *
Fast-paced and highly enjoyable, Absolute Proof has enough twists to keep the reader gripped . . . as well as making you think about some of the big questions of existence as you race to a surprising, satisfying ending * Daily Express *

GOR009950695
Absolute Proof by Peter James
Peter James
Used - Very Good
Paperback
Pan Macmillan
2019-07-23
704
1447240952
9781447240952
N/A
Book picture is for illustrative purposes only, actual binding, cover or edition may vary.
This is a used book - there is no escaping the fact it has been read by someone else and it will show signs of wear and previous use. Overall we expect it to be in very good condition, but if you are not entirely satisfied please get in touch with us.