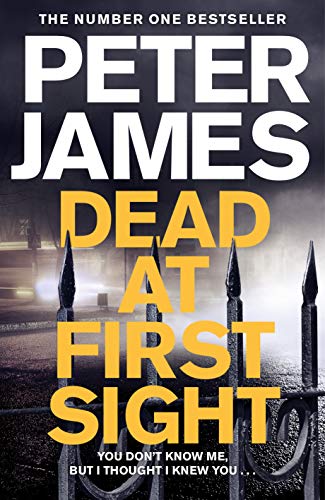 Roy Grace, creation of the award-winning author Peter James, exposes the dark side of the internet in Dead at First Sight.

A man waits at a London airport for Ingrid Ostermann, the love of his life, to arrive. Across the Atlantic, a retired NYPD cop waits in a bar in Florida's Key West for his first date with the lady who is, without question, his soulmate. The two men are about to discover they've been scammed out of almost every penny they have in the world - and that neither women exist.

Meanwhile, a wealthy divorcee plunges, in suspicious circumstances, from an apartment block in Munich. In the same week, Detective Superintendent Roy Grace is called to investigate the suicide of a woman in Brighton, that is clearly not what it seems. As his investigations continue, a handsome Brighton motivational speaker comes forward. He's discovered his identity is being used to scam eleven different women, online. The first he knew of it was a phone call from one of them, out of the blue, saying, 'You don't know me, but I thought I knew you'.

That woman is now dead.

Roy Grace realizes he is looking at the tip of an iceberg. A global empire built on clever, cruel internet scams and the murder of anyone who threatens to expose them.

Peter James has penetrated the inner workings of police procedures, and the inner thoughts and attitudes of real detectives, as no English crime writer before him. His hero, Roy Grace, may not be the most lively cop, nor the most damaged by drink, weight or misery, but he's one of the most believable * The Times *
Peter James is one of the best crime writers in the business -- Karin Slaughter
James just gets better and better and deserves the success he has achieved with this first-class series * Independent on Sunday *
Meticulous research gives his prose great authenticity . . . James manages to add enough surprises and drama that by the end you're rooting for the police and really don't know if they will finally get their men * Sunday Express *
No one can deny James's success as a crime novelist . . . The Grace stories almost always go to the top of the bestseller lists, not least because they are supremely well-told. James writes meticulously researched police procedurals, so informed that you can smell the canteen coffee . . . enthralling * Daily Mail *
In my thirty four years of policing, never have I come across a writer who so accurately depicts "The Job" -- Detective Investigator Pat Lanigan, Office of the District Attorney, NYPD
A full-throated expose * Kirkus *
The action is fast and furious, but, as in all novels in this series, it's held together by the unflappable character of Superintendent Grace . . . Not to be missed * Booklist *

GOR010126176
Dead at First Sight by Peter James
Peter James
Roy Grace
Used - Very Good
Paperback
Pan Macmillan
2019-10-17
560
1509816410
9781509816415
N/A
Book picture is for illustrative purposes only, actual binding, cover or edition may vary.
This is a used book. We do our best to provide good quality books for you to read, but there is no escaping the fact that it has been owned and read by someone else previously. Therefore it will show signs of wear and may be an ex library book.