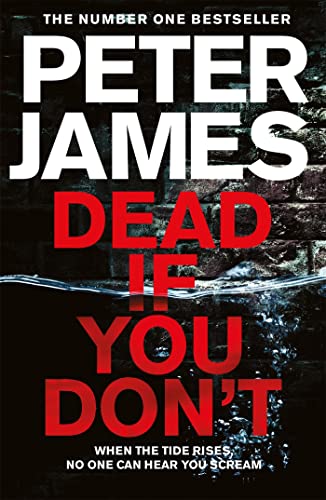 Dead If You Don't
by Peter James

Dead If You Don't Summary

Dead If You Don't by Peter James

Roy Grace, creation of the CWA Diamond Dagger award winning author Peter James, faces his most complex case yet in Dead If You Don't.

Kipp Brown, successful businessman and compulsive gambler, is having the worst run of luck of his life. He's beginning to lose big style. However, taking his teenage son, Mungo, to their club's big Saturday afternoon football match should have given him a welcome respite, if only for a few hours. But it's at the stadium where his nightmare begins.

Within minutes of arriving at the game, Kipp bumps into a client. He takes his eye of Mungo for a few moments, and in that time, the boy is gone. Then he gets the terrifying message that someone has his child, and to get him back alive, Kipp will have to pay.

Defying instruction not to contact the police, Kipp reluctantly does just that, and Detective Superintendent Roy Grace is brought into investigate. At first it seems a straightforward case of kidnap. But rapidly Grace finds himself entering a dark, criminal underbelly of the city, where the rules are different and nothing is what it seems . . .

Dead If You Don't Reviews

Peter James has penetrated the inner workings of police procedures, and the inner thoughts and attitudes of real detectives, as no English crime writer before him. His hero, Roy Grace, may not be the most lively cop, nor the most damaged by drink, weight or misery, but he's one of the most believable * The Times *
Peter James is one of the best crime writers in the business -- Karin Slaughter
James just gets better and better and deserves the success he has achieved with this first-class series * Independent on Sunday *
Meticulous research gives his prose great authenticity . . . James manages to add enough surprises and drama that by the end you're rooting for the police and really don't know if they will finally get their men * Sunday Express *
No one can deny James's success as a crime novelist . . . The Grace stories almost always go to the top of the bestseller lists, not least because they are supremely well-told. James writes meticulously researched police procedurals, so informed that you can smell the canteen coffee . . . enthralling * Daily Mail *
In my thirty four years of policing, never have I come across a writer who so accurately depicts "The Job" -- Detective Investigator Pat Lanigan, Office of the District Attorney, NYPD