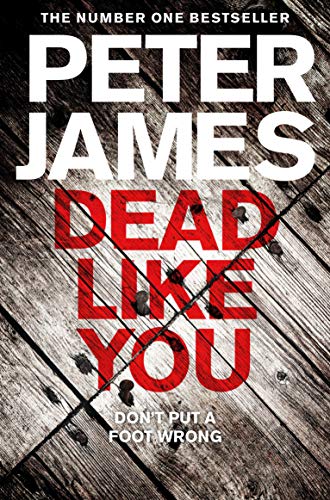 Dead Like You is the sixth novel in the multi-million copy bestselling Detective Superintendent Roy Grace series from number one author Peter James.

Don't imagine for one moment that I'm not watching you . . .

The Metropole Hotel, Brighton. After a heady New Year's Eve ball, a woman is brutally raped as she returns to her room. A week later, another woman is attacked. Both victims' shoes are taken by the offender . . .

Detective Superintendent Roy Grace soon realizes that these new cases bear remarkable similarities to an unsolved series of crimes in the city back in 1997. The perpetrator had been dubbed 'Shoe Man' and was believed to have raped five women before murdering his sixth victim and vanishing. Could this be a copycat, or has Shoe Man resurfaced?

When more women are assaulted, Grace becomes increasingly certain that they are dealing with the same man. And that by delving back into the past - a time in which we see Grace and his missing wife Sandy still apparently happy together - he may find the key to unlocking the current mystery. Soon Grace and his team will find themselves in a desperate race against the clock to identify and save the life of the new sixth victim . . .

Peter James has penetrated the inner workings of police procedures, and the inner thoughts and attitudes of real detectives, as no English crime writer before him. His hero, Roy Grace, may not be the most lively cop, nor the most damaged by drink, weight or misery, but he's one of the most believable * The Times *
Peter James is one of the best crime writers in the business -- Karin Slaughter
James just gets better and better and deserves the success he has achieved with this first-class series * Independent on Sunday *
Meticulous research gives his prose great authenticity . . . James manages to add enough surprises and drama that by the end you're rooting for the police and really don't know if they will finally get their men * Sunday Express *