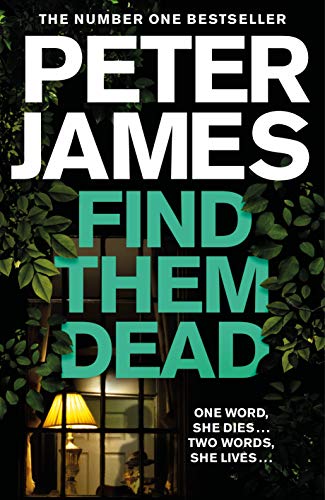 Find Them Dead
by Peter James

Find Them Dead by Peter James

Ending his secondment to London's Met Police, Roy Grace gets a tip-off about a county lines drugs mastermind operating out of Brighton. On his first day back in his old job in Sussex, he is called to a seemingly senseless murder.

Separately, Meg Magellan finally has her life back together, five years after the car crash that killed her husband and their son. Her daughter, Laura, now eighteen, is on her gap year travelling in South America with a friend, and Meg misses her badly. Laura is all she has in the world.

In between jobs, Meg receives a summons for jury service. She's excited - it might be interesting and will help distract her from constantly worrying about Laura. But when she is selected for the trial of a major Brighton drugs overlord, everything changes.

Gradually, Grace's investigation draws him increasingly into the sinister sphere of influence of the drug dealer on trial. A man utterly ruthless and evil, prepared to order the death of anyone it takes to enable him to walk free.

Just a few days into jury service, Meg arrives home to find a photograph of Laura, in Ecuador, lying on her kitchen table. Then her phone rings.

A sinister, threatening stranger is on the line. He tells her that if she ever wants to see Laura alive again, it is very simple. At the end of the trial, all she has to do is make sure the jury says just two words . . . Not guilty.

As ever, the pages become blurred as you race to discover the verdict. The plot also leaves you hungry for the next episode in DS Grace's personal drama * the i *
An intriguing glimpse into the justice system and drugs crime * Sussex Life *
Sharp, engrossing, and unexpected! -- What's Better Than Books
Peter James is one of the best crime writers in the business -- Karin Slaughter
Meticulous research gives his prose great authenticity . . . James manages to add enough surprises and drama that by the end you're rooting for the police and really don't know if they will finally get their men * Sunday Express *
James just gets better and better and deserves the success he has achieved with this first-class series * Independent on Sunday *
Peter James has penetrated the inner workings of police procedures, and the inner thoughts and attitudes of real detectives, as no English crime writer before him. His hero, Roy Grace, may not be the most lively cop, nor the most damaged by drink, weight or misery, but he's one of the most believable * The Times *

GOR010892644
Find Them Dead by Peter James
Peter James
Roy Grace
Used - Like New
Paperback
Pan Macmillan
2020-10-27
560
1529004322
9781529004328
N/A
Book picture is for illustrative purposes only, actual binding, cover or edition may vary.
The book has been read, but looks new. The book cover has no visible wear, and the dust jacket is included if applicable. No missing or damaged pages, no tears, possible very minimal creasing, no underlining or highlighting of text, and no writing in the margins.