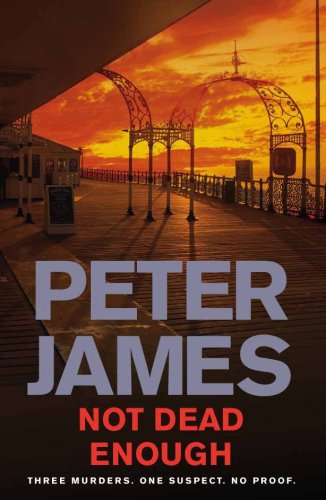 On the night Brian Bishop murdered his wife, he was sixty miles away, asleep in bed at the time. At least, that's the way it looks to Detective Superintendent Roy Grace who is called in to investigate the kinky slaying of beautiful young Brighton socialite, Katie Bishop.

Soon, Grace starts coming to the conclusion that Bishop has performed the apparently impossible feat of being in two places at once. Has someone stolen his identity, or is he simply a very clever liar? As Grace digs deeper behind the facade of the Bishops' outwardly respectable lives, it starts to become clear that all is not at all as it first seemed. And then he digs just a little too far, and suddenly the fragile stability of his own troubled, private world is facing destruction . . .

'James is a master plotter . . . this follow-up to Dead Simple cannot fail to thrill' Daily Mail

'Will have you glued to your deckchair' Observer

"'James is a master plotter... this follow-up to Dead Simple cannot fail to thrill' Daily Mail 'Will have you glued to your deckchair' Observer"

Peter James is the international bestselling author of many award-winning novels. His Detective Superintendent Roy Grace series, set in Brighton, has been translated into thirty-seven languages with worldwide sales of over nineteen million copies, and has given him twelve Sunday Times number ones. In 2015 WHSmith customers publicly voted him the Greatest Crime Author of All Time and in 2016 he became the recipient of the coveted CWA Diamond Dagger lifetime achievement award for sustained excellence. Peter has also written a short story collection, A Twist of the Knife, and his standalone titles include Perfect People and The House on Cold Hill. He has also co-written a non-fiction account of Brighton's toughest cases with former detective Graham Bartlett entitled Death Comes Knocking. The Perfect Murder, Dead Simple and Not Dead Enough have all been turned into smash-hit stage plays. All his novels reflect his deep interest in the world of the police. Three of his novels have been filmed and before becoming a full-time author he produced numerous films, including The Merchant of Venice, starring Al Pacino and Jeremy Irons.

GOR000882369
Not Dead Enough by Peter James
Peter James
Used - Very Good
Paperback
Pan Macmillan
2007-05-26
496
0230014690
9780230014695
Short-listed for Theakston's Old Peculier Crime Novel of the Year 2008
Book picture is for illustrative purposes only, actual binding, cover or edition may vary.
This is a used book - there is no escaping the fact it has been read by someone else and it will show signs of wear and previous use. Overall we expect it to be in very good condition, but if you are not entirely satisfied please get in touch with us.