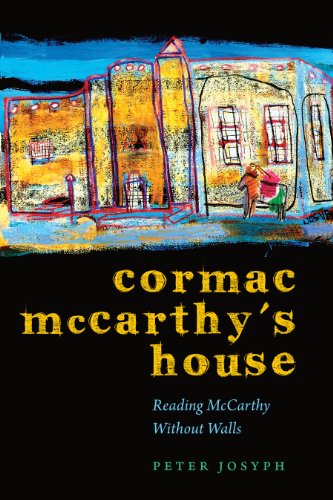 In Stock
£3.59
Unconventional journeys into the genius of Cormac McCarthy form a new, highly personal way of appreciating literary greatness
Like New
Only 1 left

Novelist Cormac McCarthy's brilliant and challenging work demands deep engagement from his readers. In Cormac McCarthy's House, author, painter, photographer, and actor-director Peter Josyph draws on a wide range of experience to pose provocative, unexpected questions about McCarthy's work, how it is achieved, and how it is interpreted.

As a visual artist, Josyph wrestles with the challenge of rendering McCarthy's former home in El Paso as a symbol of a great writer's workshop. As an actor and filmmaker, he analyzes the high art of Tommy Lee Jones in The Sunset Limited and No Country for Old Men. Invoking the recent suicide of a troubled friend, he grapples with the issue of "our brother's keeper" in The Crossing and The Sunset Limited. But for Josyph, reading the finest prose-poet of our day is a project into which he invites many voices, and his investigations include a talk with Mark Morrow about photographing McCarthy while he was writing Blood Meridian; an in-depth conversation with director Tom Cornford on the challenges of staging The Sunset Limited and The Stonemason; a walk through the streets, waterfronts, and hidden haunts of Suttree with McCarthy scholar and Knoxville resident Wesley Morgan; insights from the cast of The Gardener's Son about a controversial scene in that film; actress Miriam Colon's perspective on portraying the Duena Alfonsa opposite Matt Damon in All the Pretty Horses; and a harsh critique of Josyph's views on The Crossing by McCarthy scholar Marty Priola, which leads to a sometimes heated debate. Illustrated with thirty-one photographs, Josyph's unconventional journeys into the genius of Cormac McCarthy form a new, highly personal way of appreciating literary greatness.

"...for experienced practitioners and well-read fans it unlocks dynamic, disparate terrain. An engaging addition to the ongoing McCarthy conversation, the book is surprising and unique in the best possible ways. Summing Up: Highly recommended." * Choice *

Peter Josyph is the author or editor of six books, including Adventures in Reading Cormac McCarthy. He codirected Acting McCarthy: The Making of Billy Bob Thornton's All the Pretty Horses. His art has been used for the Portuguese editions of Suttree and Blood Meridian, for John Sepich's Notes on Blood Meridian, and for posters of the Cormac McCarthy Society. His exhibition Cormac McCarthy's House has shown at the Centennial Museum in El Paso, Texas; the CAPITAL Centre in Coventry, England; the Kulturens Hus in Lulea, Sweden; and the Loyal Jones Appalachian Center in Berea, Kentucky.

GOR010295804
Cormac McCarthy's House: Reading McCarthy Without Walls by Peter Josyph
Peter Josyph
Southwestern Writers Collection Series, Wittliff Collections at Texas State University
Used - Like New
Hardback
University of Texas Press
2013-03-01
304
0292744293
9780292744295
N/A
Book picture is for illustrative purposes only, actual binding, cover or edition may vary.
The book has been read, but looks new. The book cover has no visible wear, and the dust jacket is included if applicable. No missing or damaged pages, no tears, possible very minimal creasing, no underlining or highlighting of text, and no writing in the margins.