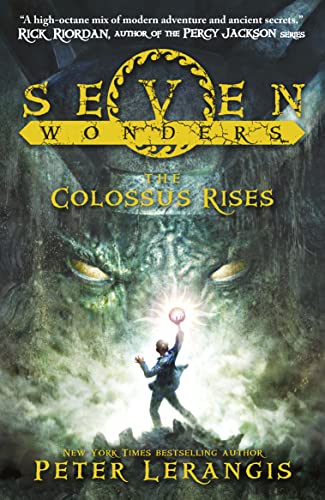 The Colossus Rises
by Peter Lerangis

"A high-octane mix of modern adventure and ancient secrets... I can't wait to see what's next" Rick Riordan

"A high-octane mix of modern adventure and ancient secrets... I can't wait to see what's next" Rick Riordan

The day after twelve-year-old Jack McKinley is told he has six months to live, he awakens on a mysterious island, where a secret organization promises to save his life - but with one condition. With his three friends, Jack must lead a mission to retrieve seven lost magical orbs, which, only when combined together, can save their lives. The challenge: the orbs have been missing for a thousand years, lost among the ruins and relics of the Seven Wonders of the Ancient World. With no one else to turn to and no escape in sight, the four friends have no choice but to undertake the quest. First stop: The Colossus of Rhodes, where they realise that there's way more at stake than just their lives.

"A high-octane mix of modern adventure and ancient secrets... I can't wait to see what's next" Rick Riordan.

PETER LERANGIS is the author of more than 160 books, which have sold more than four million copies and been translated into 27 different languages, including two books in the New York Times-bestselling series The 39 Clues (Book 3: The Sword Thief and 7: The Viper's Nest). He is also author of the hilarious, edgy YA novel wtf, and the Drama Club series, about a group of high school theater kids in a town where theater is big-budget and life-changing. His novel Smiler's Bones, based on the true story of a Polar Eskimo boy orphaned in New York City at the turn of the 20th century, was selected as a N.Y. Public Library Best Books for Teens 2006, a Bank Street Best Books of 2006, and a Junior Library Guild pick. Along with Rick Riordan, Gordon Korman, and Jude Watson, he has co-authored the upcoming Vespers Rising. His novel Somebody, Please Tell Me Who I Am, a collaboration with Harry Mazer, will be published in 2012, along with a three-book series, Perfect. Peter was one of three authors, along with R. L. Stine and Marc Brown, invited by the White House to represent the U. S. in the first Russian Book Festival in 2003. He is a Harvard graduate with a degree in biochemistry. After college he became a Broadway musical theater actor. He has run a marathon and gone rock-climbing during an earthquake, but not on the same day. He lives in New York City with his wife, musician Tina deVaron, and their two sons, Nick and Joe. In his spare time, he likes to eat chocolate. Lots of it. Seriously, he loves chocolate.

GOR004743261
The Colossus Rises (Seven Wonders, Book 1) by Peter Lerangis
Peter Lerangis
Seven Wonders
Used - Very Good
Paperback
HarperCollins Publishers
2013-02-01
256
0007515030
9780007515035
N/A
Book picture is for illustrative purposes only, actual binding, cover or edition may vary.
This is a used book - there is no escaping the fact it has been read by someone else and it will show signs of wear and previous use. Overall we expect it to be in very good condition, but if you are not entirely satisfied please get in touch with us.