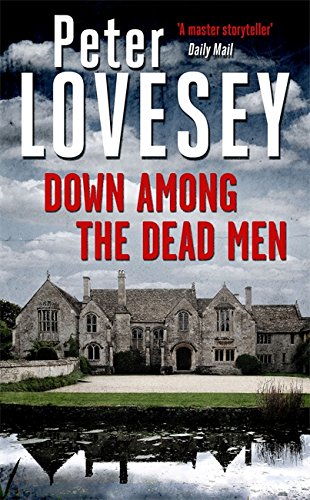 Down Among the Dead Men
by Peter Lovesey

Down Among the Dead Men Summary

Down Among the Dead Men by Peter Lovesey

The fifteenth book in the award-winning Peter Diamond series, from Peter Lovesey.

A nightmare discovery in the boot of a stolen BMW plunges car thief Danny Stapleton into the worst trouble of his life. What links his misfortune to the mysterious disappearance of an art teacher at a private school for girls in Chichester?

Orders from above push Peter Diamond of Bath CID into investigating a police corruption case in the Chichester force, and he soon finds himself reluctantly dealing with spirited schoolgirls, eccentric artists and his formidable old colleague, Hen Mallin.

Multi-award-winning author Peter Lovesey returns with a twisting tale that will delight fans of the series and draw in anyone who loves pitch-perfect traditional British crime fiction.

Customer Reviews - Down Among the Dead Men

Down Among the Dead Men Reviews

In his lengthy career, veteran novelist Peter Lovesey has supplied the most diverting (and elegantly written) crime fiction - Good Book GuideDiamond is a wonderfully rounded character whose lines are witty and whose observations about people's characters and motives are brilliantly insightful. Vintage Diamond mystery, spiced by his comic encounters with his supervisor: a must for devotees of character-driven British crime fiction - BooklistWhat'll it be today? A knotty puzzle mystery? A fast-paced police procedural? Something more high-toned, with a bit of wit? With the British author Peter Lovesey, there's no need to make those agonizing decisions, because his books have it all - New York Times

Peter Lovesey was born in Middlesex and studied at Hampton Grammar School and Reading University, where he met his wife Jax. He won a competition with his first crime fiction novel, Wobble to Death, and has never looked back, with his numerous books winning and being shortlisted for nearly all the prizes in the international crime writing world.

He was Chairman of the Crime Writers' Association and has been presented with Lifetime Achievement awards both in the UK and the US.

GOR007370979
Down Among the Dead Men by Peter Lovesey
Peter Lovesey
Peter Diamond Mystery
Used - Very Good
Paperback
Little, Brown Book Group
2016-04-21
384
0751558893
9780751558890
N/A
Book picture is for illustrative purposes only, actual binding, cover or edition may vary.
This is a used book - there is no escaping the fact it has been read by someone else and it will show signs of wear and previous use. Overall we expect it to be in very good condition, but if you are not entirely satisfied please get in touch with us.