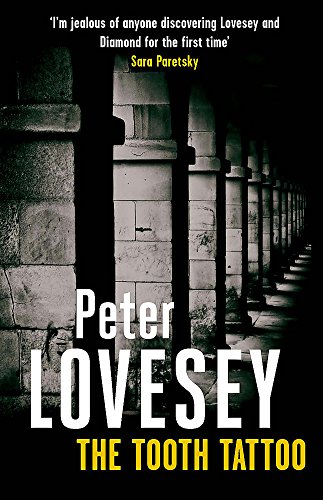 The Tooth Tattoo
by Peter Lovesey

In Stock
£2.99
A Peter Diamond case in which the Bath detective solves a perplexing case with an international reach
Very Good Good
Only 4 left

The Tooth Tattoo: 13 by Peter Lovesey

The thirteenth book in the award-winning Peter Diamond series, from Peter Lovesey.

Peter Diamond, head of Bath CID, takes a city break in Vienna, where his favourite film, The Third Man, was set, but everything goes wrong and his companion, Paloma, calls a halt to their relationship.

Meanwhile, strange things are happening to jobbing musician Mel Farran, who finds himself scouted by methods closer to the spy world than the concert platform. The chance of joining a once-famous string quartet in a residency at Bath Spa University is too tempting for Mel to refuse.

Then a body is found in the city canal, and the only clue to the dead woman's identity is the tattoo of a musical note on one of her teeth. For Diamond, who wouldn't know a Stradivarius from a French horn, the investigation is his most demanding ever. Three mysterious deaths need to be probed while his own personal life is in free fall...

Peter Lovesey has been hailed by the critics as 'superlative', 'a master of the genre', 'never puts a foot wrong' and the Peter Diamond series as 'one of the most enjoyable police series around'. This new case for the greatly loved detective will bring new praise and much satisfaction for his legions of fans.

Peter Lovesey was born in Middlesex and studied at Hampton Grammar School and Reading University, where he met his wife Jax. He won a competition with his first crime fiction novel, Wobble to Death, and has never looked back, with his numerous books winning and being shortlisted for nearly all the prizes in the international crime writing world.

He was Chairman of the Crime Writers' Association and has been presented with Lifetime Achievement awards both in the UK and the US.

GOR005582502
The Tooth Tattoo: 13 by Peter Lovesey
Peter Lovesey
Peter Diamond Mystery
Used - Very Good
Paperback
Little, Brown Book Group
2014-02-06
400
0751550604
9780751550603
N/A
Book picture is for illustrative purposes only, actual binding, cover or edition may vary.
This is a used book - there is no escaping the fact it has been read by someone else and it will show signs of wear and previous use. Overall we expect it to be in very good condition, but if you are not entirely satisfied please get in touch with us.