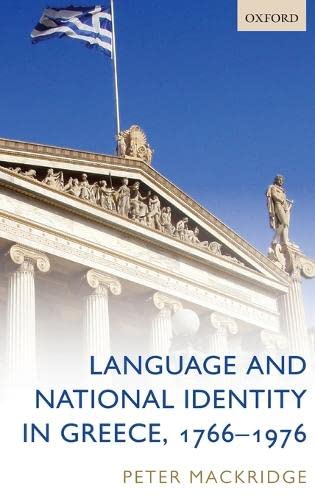 In Stock
£42.99
Peter Mackridge explores the ideological, social, and linguistic causes and effects of the Greek language question in its many and passionate manifestations over two turbulent centuries. He shows the crucial way in which Greek linguistic identities have interacted in the creation of the modern nation since the War of Independence in 1821.
Very Good
Only 1 left

This is a history of the great language controversy that has occupied and impassioned Greeks - sometimes with fatal results - for over two hundred years. It begins in the late eighteenth century when a group of Greek intellectuals sought to develop a new, Hellenic, national identity alongside the traditional identity supplied by Orthodox Christianity. The ensuing controversy focused on the language, fuelled on the one hand by a desire to develop a form of Greek that expressed the Greeks' relationship to the ancients, and on the other by the different groups' contrasting notions of what the national image so embodied should be. The purists wanted a written language close to the ancient. The vernacularists - later known as demoticists - sought to match written language to spoken, claiming the latter to be the product of the unbroken development of Greek since the time of Homer. Peter Mackridge explores the political, social, and linguistic causes and effects of the controversy in its many manifestations. Drawing on a wide range of evidence from literature, language, history, and anthropology, he traces its effects on spoken and written varieties of Greek and shows its impact on those in use today. He describes the efforts of linguistic elites and the state to achieve language standardization and independence from languages such as Turkish, Albanian, Vlach, and Slavonic. This is a timely book. The sense of national and linguistic identity that has been inculcated into generations of Greeks since the start of the War of Independence in 1821 has, in the last 25 years, received blows from which it may not recover. Immigration from Eastern Europe and elsewhere has introduced new populations whose religions, languages, and cultures are transforming Greece into a country quite different from what it has been and from what it once aspired to be.

Mackridge has absorbed [such] recent work not only in linguistics but also history and cultural studies and it informs his new book, which is the fruit of a whole career pondering the language. It is probably the most comprehensive and authoritative account of the development of the Greek language (or languages) since the late 18th century. * Michael Llewellyn Smith, Anglo-Hellenic Review *
There can be little doubt that this work is a major contribution to the cultural history of Greece. Peter Mackridge has written a book that is authoritative, hugely informative, an inexhaustible source of useful detail and sound judgement, that makes complete and fair use of all available literature on an important and controversial subject. For all this we should be grateful. * Paschalis M. Kitromilides *
This book provides the first authoritative, nuanced, and analytical account of the notorious language question in modern Greece. Drawing copiously on original sources that have often been overlooked, even by specialists, Mackridge coherently and convincingly explains why the "correct" form of their national language mattered so much to Greek-speakers for more than two centuries. In doing so he also argues powerfully for the role of language to be better studied as part of the global phenomenon of nation-formation. * Roderick Beaton *
Modern Greek, a more extraordinary language even than English, reaches back to Homer, Sophocles, Plato, and Sappho. For Greeks, the demotic language of today is part of a three-thousand-year continuum that buoys their sense of pride and identity. "What a joy it is to fashion our language!" says Kazantzakis. Peter Mackridge's incisive examination shows why. * Peter Bien *
Despite its methodological foundation in linguistics and social sciences, the study has a great scholarly accomplishment that is basically historical...Peter Mackridge's book should be read by all students in all the social sciences. * Anna Frangoudaki, The Athens Review of Books *

GOR004707001
Language and National Identity in Greece, 1766-1976 by Peter Mackridge (Emeritus Professor of Modern Greek, Oxford)
Peter Mackridge (Emeritus Professor of Modern Greek, Oxford)
Used - Very Good
Hardback
Oxford University Press
2009-04-02
402
0199214425
9780199214426
Winner of Shortlisted for the 2010 Runciman Award awarded by the Anglo-Hellenic League.
Book picture is for illustrative purposes only, actual binding, cover or edition may vary.
This is a used book - there is no escaping the fact it has been read by someone else and it will show signs of wear and previous use. Overall we expect it to be in very good condition, but if you are not entirely satisfied please get in touch with us.