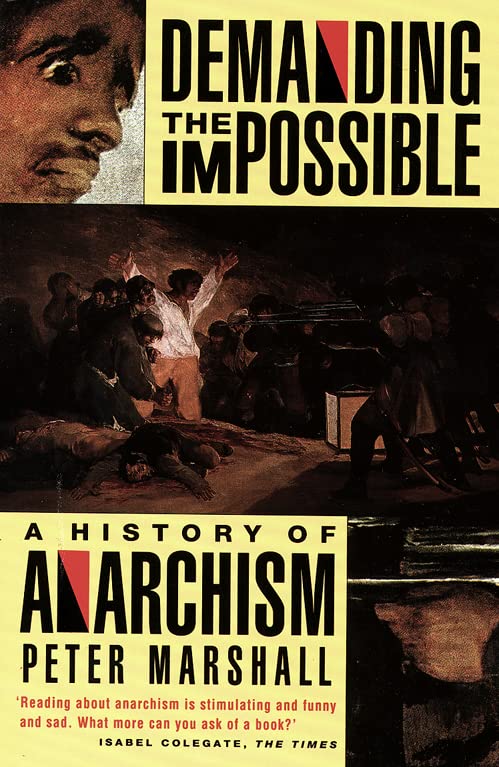 Demanding the Impossible
by Peter Marshall

A fascinating and comprehensive history, 'Demanding the Impossible' is a challenging and thought-provoking exploration of anarchist ideas and actions from ancient times to the present day.

Demanding the Impossible by Peter Marshall

A fascinating and comprehensive history, 'Demanding the Impossible' is a challenging and thought-provoking exploration of anarchist ideas and actions from ancient times to the present day.

Navigating the broad 'river of anarchy', from Taoism to Situationism, from Ranters to Punk rockers, from individualists to communists, from anarcho-syndicalists to anarcha-feminists, 'Demanding the Impossible' is an authoritative and lively study of a widely misunderstood subject. It explores the key anarchist concepts of society and the state, freedom and equality, authority and power and investigates the successes and failure of the anarchist movements throughout the world. While remaining sympathetic to anarchism, it presents a balanced and critical account. It covers not only the classic anarchist thinkers, such as Godwin, Proudhon, Bakunin, Kropotkin, Reclus and Emma Goldman, but also other libertarian figures, such as Nietzsche, Camus, Gandhi, Foucault and Chomsky. No other book on anarchism covers so much so incisively.

In this updated edition, a new epilogue examines the most recent developments, including 'post-anarchism' and 'anarcho-primitivism' as well as the anarchist contribution to the peace, green and 'Global Justice' movements.

Demanding the Impossible is essential reading for anyone wishing to understand what anarchists stand for and what they have achieved. It will also appeal to those who want to discover how anarchism offers an inspiring and original body of ideas and practices which is more relevant than ever in the twenty-first century.

'An exhaustive and authoritative study which is bound to become the standard account.' John Gray, The Times

'This is the most comprehensive account of anarchist thought ever written. Marshall's knowledge is formidable and his enthusiasm engaging.' J.P. Pick, Scotsman

'Large, labyrinthine, tentative: for me these are all adjectives of praise when applied to works of history, and Demanding the Impossible meets all of them.' George Woodcock, Independent

Peter Marshall is a historian, philosopher, biographer and travel writer. He has written fifteen books, has taught at several British universities and occasionally works in broadcasting. He lives in Devon.

GOR003578820
Demanding the Impossible by Peter Marshall
Peter Marshall
Used - Well Read
Paperback
HarperCollins Publishers
1993-01-29
784
0006862454
9780006862451
N/A
Book picture is for illustrative purposes only, actual binding, cover or edition may vary.
This is a used book. We do our best to provide good quality books for you to read, but there is no escaping the fact that it has been owned and read by someone else previously. Therefore it will show signs of wear and may be an ex library book.