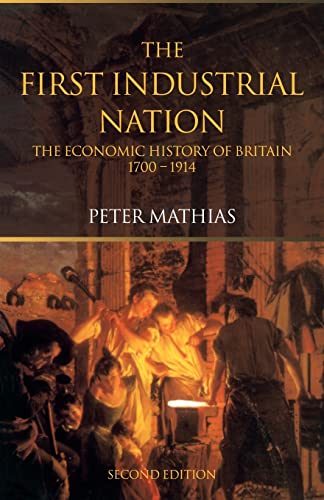 Out of Stock
£3.99
The industiral revolution of Britain is recognised today as a model for industrialisation all over the world. Now reissued with a new introduction by the author, this book is widely renowned as a classic text for students of this key period.
Very Good
Only 0 left

This celebrated and seminal text examines the industrial revolution, from its genesis in pre-industrial Britain, through its development and into maturity. A chapter-by-chapter analysis explores topics such as economic growth, agriculture, trade finance, labour and transport.
First published in 1969, The First Industrial Nation is widely recognised as a classic text for students of the industrial revolution.

'Remains the finest textbook of British economic history between 1700 and 1914 available to sixth-form and undergraduate students.' - Teaching History

'It should be made available to every sixth-form pupil taking an Advanced level course in the subject.' - Economics

Peter Mathias was Master of Downing College, Cambridge until his retirement in 1996.

1. Prologue: The Industrial Revolution - Identity and Beginning Part 1: The Industrial Economy is Born: 1700 to the Early Nineteenth Century 2. Gregory King's England 3. The State, Rural Society and the Land 4. Economic Policy, Trade and Transport 5. Industrial Growth and Finance 6. The Human Dimension 7. Economic Fluctuations Part 2: The Evolving Industrial Economy: To 1914 8. The Century Ahead - Changing Structure of the British Economy 9. Occupational Structure and Industrial Organization in the Mid-Nineteenth Century 10. Railways 11. The Free Trade System and Capital Exports 12. Agriculture, 1815-1914 13. The Evolution of Banking and the Money Market, 1825-1914 14. The Organization of Labour and Standards of Living 15. Industrial Maturity and Deceleration 16. Epilogue: The Inter-War Years

GOR001195599
The First Industrial Nation: The Economic History of Britain 1700-1914 by Peter Mathias (Honorary Fellow, University of Cambridge, UK)
Peter Mathias (Honorary Fellow, University of Cambridge, UK)
Used - Very Good
Paperback
Taylor & Francis Ltd
2001-10-11
528
0415266726
9780415266727
N/A
Book picture is for illustrative purposes only, actual binding, cover or edition may vary.
This is a used book - there is no escaping the fact it has been read by someone else and it will show signs of wear and previous use. Overall we expect it to be in very good condition, but if you are not entirely satisfied please get in touch with us.