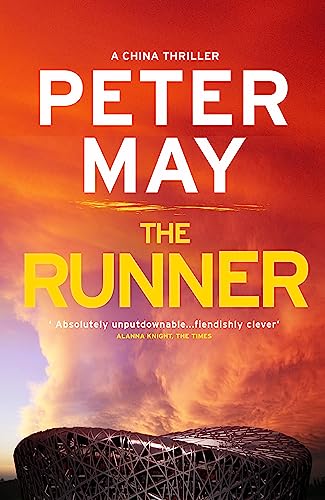 The Runner
by Peter May

The Runner: A pulse-pounding thriller with a cruel conspiracy (China Thriller 5) by Peter May

A prodigious Chinese swimmer kills himself on the eve of the Beijing Olympics. Days later, a champion weightlifter suffers a fatal heart attack prior to competition.

Detective Li Yan senses a conspiracy surrounding the fatalities, and finds a female athlete willing to talk. But she will only trust one person: Li's fiancee, Margaret Campbell.

When Campbell's contact herself vanishes, the gun is fired on a race against time. And Li must now outrun, and outwit, an enemy bent on pushing him beyond endurance.

LOVED THE RUNNER? Read the final book in the China series, CHINESE WHISPERS
LOVE PETER MAY? Order his new thriller, A SILENT DEATH

GOR008676103
The Runner: A pulse-pounding thriller with a cruel conspiracy (China Thriller 5) by Peter May
Peter May
China Thrillers
Used - Very Good
Paperback
Quercus Publishing
2017-09-07
448
1782062343
9781782062349
N/A
Book picture is for illustrative purposes only, actual binding, cover or edition may vary.
This is a used book - there is no escaping the fact it has been read by someone else and it will show signs of wear and previous use. Overall we expect it to be in very good condition, but if you are not entirely satisfied please get in touch with us.