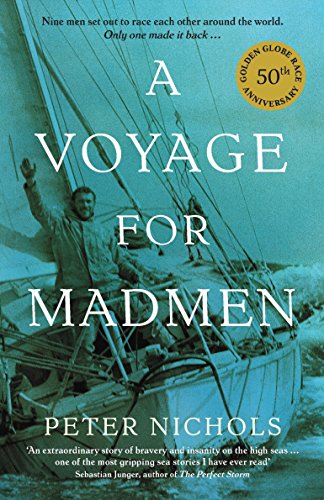 A Voyage For Madmen
by Peter Nichols

In Stock
£5.49
In 1968, nine men - six Englishmen, two Frenchmen and an Italian - set out to try, a race born of coincidence of their timing. One didn't even know how to sail. This is a true story of the inaugural 1968 Golden Globe sailing race: the first single-handed non-stop circumnavigation of the world.
Good Well Read
9 in stock

A Voyage For Madmen Summary

A Voyage For Madmen: Nine men set out to race each other around the world. Only one made it back ... by Peter Nichols

Published to coincide with the Golden Globe Race's 50th Anniversary It lay like a gauntlet thrown down; to sail around the world alone and non-stop. No one had ever done it, no one knew if it could be done. In 1968, nine men - six Englishmen, two Frenchmen and an Italian - set out to try, a race born of coincidence of their timing. One didn't even know how to sail. They had more in common with Captain Cook or Ferdinand Magellan than with the high-tech, extreme sailors of today, a mere forty years later. It was not the sea or the weather that determined the nature of their voyages but the men they were, and they were as different from one another as Scott from Amundsen. Only one of the nine crossed the finishing line after ten months at sea. The rest encountered despair, sublimity, madness and even death.

A Voyage For Madmen Reviews

Told with verve and riddled with drama, you can smell the salty air and feel the spray on every page * Sunday Times *
An enthralling tale of human endeavour and courage in the face of adversity ... you don't need to know your spinnaker from your mainsail to enjoy this book * Tatler *
As a carpenter purrs over perfect dovetailing, so I rejoiced in the craftsmanship of this book * Simon Barnes *

Peter Nichols is the author of the bestselling novel The Rocks, and the international bestsellers A Voyage for Madmen (finalist for the William Hill Sports Book of the Year), Evolution's Captain, and three other books of fiction, memoir, and non-fiction. His novel Lodestar was nominated for the Dublin IMPAC literary award. He has taught creative writing at a number of universities, including Georgetown University, Bowdoin College, New York University in Paris, and Antioch University Los Angeles. Before turning to writing full time, he held a 100 ton USCG Ocean Operator's licence and was a professional yacht delivery skipper for 10 years. He has also worked in advertising in London, as a screenwriter in Los Angeles, been a shepherd in Wales, and sailed alone in a small boat across the Atlantic.

GOR003649258
A Voyage For Madmen: Nine men set out to race each other around the world. Only one made it back ... by Peter Nichols
Peter Nichols
Used - Good
Paperback
Profile Books Ltd
2011-05-05
352
1846684439
9781846684432
N/A
Book picture is for illustrative purposes only, actual binding, cover or edition may vary.
This is a used book - there is no escaping the fact it has been read by someone else and it will show signs of wear and previous use. Overall we expect it to be in very good condition, but if you are not entirely satisfied please get in touch with us.