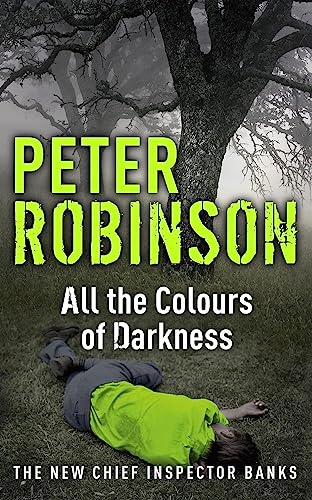 All the Colours of Darkness
by Peter Robinson

The 18th in the series - a number one bestseller - takes DCI Banks on a torturous journey to the truth.

All the Colours of Darkness Summary

All the Colours of Darkness: DCI Banks 18 by Peter Robinson

A beautiful June day in the Yorkshire Dales, and a group of children are spending the last of their half-term freedom swimming in the river near Hindswell Woods.

But the idyll is shattered by their discovery of a man's body, hanging from a tree. DI Annie Cabott soon discovers he is Mark Hardcastle, the well-liked and successful set designer for the Eastvale Theatre's current production of Othello. Everything points to suicide, and Annie is mystified. Why would such a man want to take his own life?

Then Annie's investigation leads to another shattering discovery, and DCI Alan Banks is called back from the idyllic weekend he had planned with his new girlfriend. Banks soon finds himself plunged into a shadow-world where nothing is what it seems, where secrets and deceit are the norm, and where murder is seen as the solution to a problem. The deeper he digs the more he discovers that the monster he has awakened will extend its deadly reach to his friends and family. Nobody is safe.

All the Colours of Darkness Reviews

First class crime complete with a lot of emotional intrigue * Mirror *
The Alan Banks mystery-suspense novels are, simply put, the best series on the market * Stephen King *
Banks is one of the most fully-drawn figures in this genre of fiction * New York Times *
Praise for PIECE OF MY HEART and FRIEND OF THE DEVIL * : *
Brilliant! * Jeffery Deaver *
'Peter Robinson has for too long, and unfairly, been in the shadow of Ian Rankin; perhaps PIECE OF MY HEART, the latest in the Chief Inspector Banks series, will give him the status he deserves, near, perhaps even at the top of, the British crime writers' league . . . PIECE OF MY HEART brilliantly interweaves past and present . . . further enhancing Alan Banks's reputation as one of crime fiction's most appealing cops' * Marcel Berlins, The Times *
Peter Robinson is good at producing ingenious mysteries, and this one does not disappoint * Susanna Yager, Daily Telegraph *
A police procedural that grips like pliers * Independent on Sunday *

GOR000912159
All the Colours of Darkness: DCI Banks 18 by Peter Robinson
Peter Robinson
DCI Banks
Used - Very Good
Paperback
Hodder & Stoughton General Division
2009-02-05
528
0340836946
9780340836941
N/A
Book picture is for illustrative purposes only, actual binding, cover or edition may vary.
This is a used book - there is no escaping the fact it has been read by someone else and it will show signs of wear and previous use. Overall we expect it to be in very good condition, but if you are not entirely satisfied please get in touch with us.