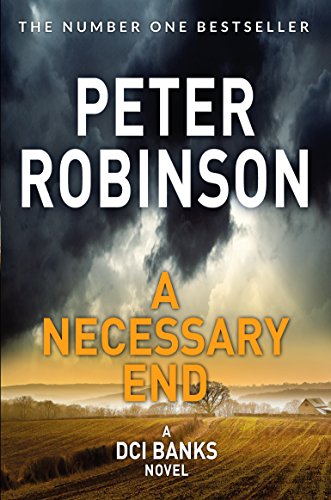 A Necessary End
by Peter Robinson

A Necessary End by Peter Robinson

'The Alan Banks mystery-suspense novels are the best series on the market. Try one and tell me I'm wrong.' - Stephen King.

A Necessary End is the third novel in Peter Robinson's Inspector Banks series, following on from A Dedicated Man.

Peace destroyed. Lives in ruin. Banks must race to find the killer . . .

Everyday life in Eastvale is shattered when a policeman is stabbed to death after an anti-nuclear demonstration turns violent. Superintendent 'Dirty Dick' Burgess, Banks's nemesis, descends with vengeful fury on those he deems responsible.

Inspector Banks is uneasy about Burgess's mishandling of the case, but despite being warned off he puts his career in jeopardy to continue his search for the truth, knowing if he is to keep his job, he must beat Burgess to the killer . . .

A Necessary End is followed in the Inspector Banks series by The Hanging Valley.

Inspector Banks - a man for all seasons, he knows that often the answers to the clues he seeks are hidden in his own heart -- Michael Connelly
An award-winning writer with ideas that are imaginative and plots that are refreshingly cliche-free * Time Out *
If you haven't caught up with Peter Robinson already, now is the time to start * Independent on Sunday *

Peter Robinson grew up in Yorkshire and now lives in Canada. His Inspector Banks series has won numerous awards in Britain, Europe, the United States and Canada. There are fifteen novels published by Pan Macmillan in the series. Aftermath, the twelfth, was a Sunday Times bestseller.

GOR009282560
A Necessary End by Peter Robinson
Peter Robinson
The Inspector Banks series
Used - Very Good
Paperback
Pan Macmillan
2018-06-26
384
1509857052
9781509857050
N/A
Book picture is for illustrative purposes only, actual binding, cover or edition may vary.
This is a used book - there is no escaping the fact it has been read by someone else and it will show signs of wear and previous use. Overall we expect it to be in very good condition, but if you are not entirely satisfied please get in touch with us.