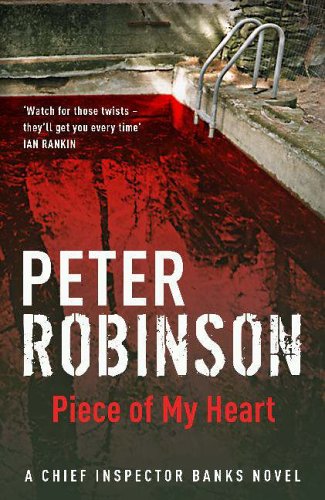 Piece of My Heart
by Peter Robinson

In Stock
£2.99
The stunning new Inspector Banks novel, backed by a major advertising drive to take Peter Robinson to Number One.
Very Good
Only 2 left

Piece of My Heart Summary

Piece of My Heart: DCI Banks 16 by Peter Robinson

As volunteers clean up after a huge outdoor rock concert in Yorkshire in 1969, they discover the body of a young woman wrapped in a sleeping bag. She has been brutally murdered. The detective assigned to the case, Stanley Chadwick, is a hard-headed, strait-laced veteran of the Second World War. He could not have less in common with - or less regard for - young, disrespectful, long-haired hippies, smoking marijuana and listening to the pulsing sounds of rock and roll. But he has a murder to solve, and it looks as if the victim was somehow associated with the up-and-coming psychedelic pastoral band the Mad Hatters.

In the present, Inspector Alan Banks is investigating the murder of a freelance music journalist who was working on a feature about the Mad Hatters for MOJO magazine. This is not the first time that the Mad Hatters, now aging rock superstars, have been brushed by tragedy. Banks finds he has to delve into the past to find out exactly what hornets' nest the journalist inadvertently stirred up.

Piece of My Heart Reviews

The Alan Banks mystery-suspense novels are, simply put, the best series on the market * Stephen King *
A terrific contemporary crime novel * Independent on Sunday *
Further enhances Alan Banks' reputation as one of crime fiction's most appealing cops * The Times *
Classic Robinson: labyrinthine plot merged with deft characterisation * Observer *
Banks is one of the most fully drawn figures in this genre of fiction * New York Times *
'Robinson delicately reveals a web of passion and pain whose pattern still isn't complete' * Kirkus Reviews *
Praise for Peter Robinson:
The Alan Banks mystery-suspense novels are, simply put, the best series now on the market. * Stephen King *
'A fascinating and atmospheric exploration of the way the past intrudes on the present' * Mo Hayder, Globe and Mail *
Move over Ian Rankin - there's a new gunslinger in town. If you haven't caught up with him already, now is the time to start * Independent on Sunday *
Prepare for a crash course in taut, clean writing and subtle psychology * Ian Rankin *
A wonderful novel. * Michael Connelly *
'Each time you think you're a step ahead of the author, Robinson jumps in with a jaw-dropping twist.' * People *

'Peter Robinson has for too long, and unfairly, been in the shadow of Ian Rankin; perhaps Piece of My Heart, the latest in the Chief Inspector Banks series, will give him the status he deserves - near, perhaps even at the top of, the British crime writers' league'...

Piece of My Heart brilliantly interweaves past and present, providing two strands of tension for the price of one, and further enhancing Alan Banks's reputation as one of crime fiction's most appealing cops'

GOR004804200
Piece of My Heart: DCI Banks 16 by Peter Robinson
Peter Robinson
Used - Very Good
Paperback
Hodder & Stoughton
2006-06-08
448
0340836873
9780340836873
Short-listed for Theakston's Old Peculier Crime Novel of the Year 2008
Book picture is for illustrative purposes only, actual binding, cover or edition may vary.
This is a used book - there is no escaping the fact it has been read by someone else and it will show signs of wear and previous use. Overall we expect it to be in very good condition, but if you are not entirely satisfied please get in touch with us.