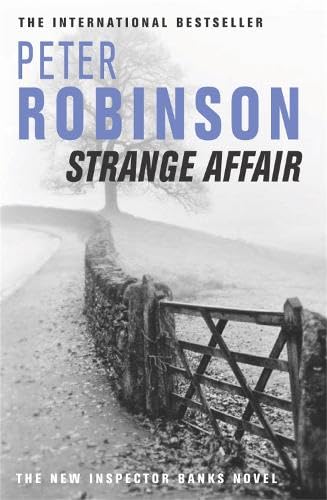 In Stock
£4.49
The gripping new Inspector Banks novel from the bestselling author of PLAYING WITH FIRE
Like New Very Good Good
16 in stock

When Alan Banks receives a disturbing message from his brother, Roy, he abandons the peaceful Yorkshire Dales for the bright lights of London, to seek him out. But Roy seems to have vanished into thin air.

Meanwhile, DI Annie Cabbot is called to a quiet stretch of road just outside Eastvale, where a young woman has been found dead in her car. In the victim's pocket, scribbled on a slip of paper, police discover Banks' name and address.

Living in Roy's empty South Kensington house, Banks finds himself digging into the life of the brother he never really knew, nor even liked. And as he begins to uncover a few troubling surprises, the two cases become sinisterly entwined . . .

'The Banks novels are, simply put, the best series now on the market' STEPHEN KING

Peter Robinson grew up in Yorkshire, and now lives in Canada. STRANGE AFFAIR is the fifteenth novel in his bestselling Inspector Banks series. The critically acclaimed series has won numerous awards in Britain, the United States, Canada and Europe.

GOR000418389
Strange Affair by Peter Robinson
Peter Robinson
The Inspector Banks series
Used - Very Good
Paperback
Pan Macmillan
2005-06-03
448
0330491652
9780330491655
N/A
Book picture is for illustrative purposes only, actual binding, cover or edition may vary.
This is a used book - there is no escaping the fact it has been read by someone else and it will show signs of wear and previous use. Overall we expect it to be in very good condition, but if you are not entirely satisfied please get in touch with us.