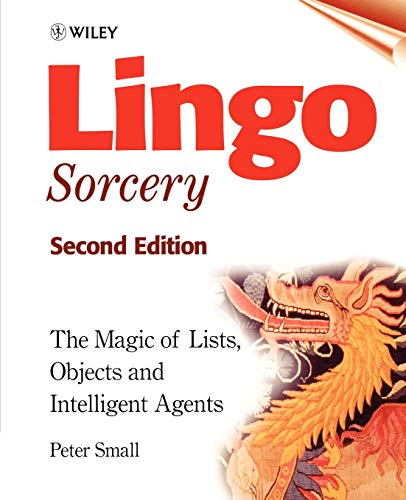 * In my opinion, Lingo Sorcery is easily the best info on OOP for Lingo.

* I am finally starting to get the hang of OOPing, but I heard Peter's book is awesome.

* See some crazy (but interesting) examples of ways to use OOP with Lingo, read Lingo Sorcery by Peter Small.
Very Good
Only 1 left

Lingo Sorcery: The Magic of Lists, Objects and Intelligent Agents by Peter Small

Have you wanted to acquire that essential programming edge which will allow you to harness the full power of lists and objects? Are you looking to create innovative Director products for the Internet at the highest level of technical expertise? Have you reached that stage of using Lingo where the only next step you can take is to finally understand object-oriented programming?

If you have said "yes" to any of the above, you have the right book in your hands. It is the first choice of both professionals and learners alike and is the most frequently recommended book on the Director User Internet forums for understanding the black art of OOPS and taking Lingo programming to areas the manuals never reach.

THis second edition covers two major advances in Director which have opened up new vistas to users. Behaviours are easy to conceptualize, and allow those who have very little programming knowledge to design an object-orientated programming (OOP) style. The new Application programming Interface (API) introduced along with a set of Net Xtras has transormed Director from aclosed application into an open system, allowing it to become the new killer app for thr Internet and the Web.

What readers said about the first edition...

* ...for my money it's the best Director book in the market.

* Lingo Sorcery is amazing. It's not a "how to" book per se, (though it has lots of how to in it) it's a "how to" book with a lot of accompanying thoughts on how most effectively to think about OOP and multimedia design from an organic point of view.

* In my opinion, Lingo Sorcery is easily the best info on OOP for Lingo.

* I am finally starting to get the hang of OOPing, but I heard Peter's book is awesome.

* See some crazy (but interesting) examples of ways to use OOP with Lingo, read Lingo Sorcery by Peter Small. It's amazing. It will really get your creative juices flowing.

"...Plenty of good advice is dispensed on techniques for using objects and lists to best effect. At this price the book is value for money...", , , Computer Bulletin, November 1999 #

The Basis of Complex Objects.

The Mechanics of Linear Lists.

The Mechanics of Property Lists.

Magical Tricks with Lists and Objects.

Making a Paint Box with a Memory.

The Magic of MIAW Objects.

GOR004784016
Lingo Sorcery: The Magic of Lists, Objects and Intelligent Agents by Peter Small
Peter Small
Used - Very Good
Paperback
John Wiley & Sons Inc
1998-12-07
590
0471986151
9780471986157
N/A
Book picture is for illustrative purposes only, actual binding, cover or edition may vary.
This is a used book - there is no escaping the fact it has been read by someone else and it will show signs of wear and previous use. Overall we expect it to be in very good condition, but if you are not entirely satisfied please get in touch with us.