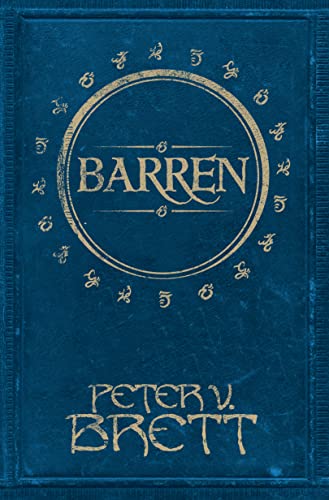 Each night, the world is overrun by bloodthirsty demons. For centuries, humanity survived only by hiding behind defensive wards - magical symbols of power. Now, though, the rediscovery of other, long-forgotten wards has given them the magic they need to fight back...

In Tibbet's Brook, the fighting wards have brought change, heightening tensions and grudges of a troubled past. Selia Square, the woman they call Barren, has long been the force holding the Brook together. As a terrifying new threat emerges, she must rally the people of the Brook once more.

But Selia has a past of her own. And in a small community the personal and the political can never be divided. If Tibbet's Brook is to survive, Selia must uncover memories she has buried deep - of the woman she once was and the woman she once loved - to retell their story.

GOR009565480
Barren (Novella) by Peter V. Brett
Peter V. Brett
Used - Very Good
Hardback
HarperCollins Publishers
2018-09-20
128
0008234124
9780008234126
N/A
Book picture is for illustrative purposes only, actual binding, cover or edition may vary.
This is a used book - there is no escaping the fact it has been read by someone else and it will show signs of wear and previous use. Overall we expect it to be in very good condition, but if you are not entirely satisfied please get in touch with us.