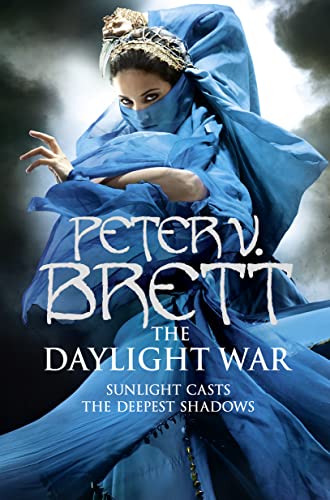 Continuing the impressive debut fantasy series from author Peter V. Brett, The DAYLIGHT WAR is book three of the Demon Cycle, pulling the reader into a world of demons, darkness and heroes.

Continuing the impressive debut fantasy series from author Peter V. Brett, The DAYLIGHT WAR is book three of the Demon Cycle, pulling the reader into a world of demons, darkness and heroes.

Humanity is fighting back. Although the night still belongs to the demons that arise as the sun sets, new wards and weapons are giving those willing to fight in the darkness a chance to retaliate against their core-spawned enemies.

But, as humanity is about to learn, not all monsters are confined to the dark.

Civil war ravages the north and south, battles fought between those who should be working together. It is up to Arlen - the Painted Man - and Jardir - the self-proclaimed Shar'Dama Ka, the Deliverer - to put aside their differences and bring their people to terms if they are to have any chance of saving their civilisation from demon-rule.

GOR006101616
The Daylight War (The Demon Cycle, Book 3) by Peter V. Brett
Peter V. Brett
The Demon Cycle
Used - Very Good
Paperback
HarperCollins Publishers
2013-02-11
816
0007276214
9780007276219
N/A
Book picture is for illustrative purposes only, actual binding, cover or edition may vary.
This is a used book - there is no escaping the fact it has been read by someone else and it will show signs of wear and previous use. Overall we expect it to be in very good condition, but if you are not entirely satisfied please get in touch with us.