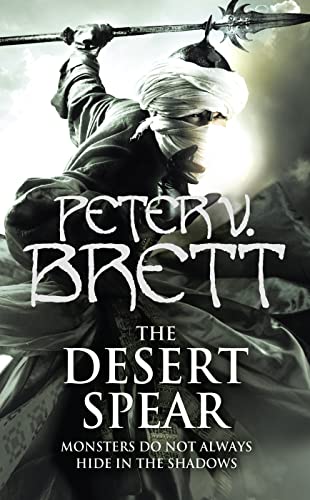 Continuing the impressive debut fantasy series from author Peter V. Brett, The Desert Spear is book two of the Demon Cycle, pulling the reader into a world of demons, darkness and heroes.

Continuing the impressive debut fantasy series from author Peter V. Brett, The Desert Spear is book two of the Demon Cycle, pulling the reader into a world of demons, darkness and heroes.

The Deliverer has returned, but who is he?

Arlen Bales, formerly of the small hamlet of Tibbet's Brook, learnt harsh lessons about life as he grew up in a world where hungry demons stalk the night and humanity is trapped by its own fear. He chose a different path; chose to fight inherited apathy and the corelings, and eventually he became the Painted Man, a reluctant saviour.

But the figure emerging from the desert, calling himself the Deliverer, is not Arlen. He is a friend and betrayer, and though he carries the spear from the Deliverer's tomb, he also heads a vast army intent on a holy war against the demon plague... and anyone else who stands in his way.

GOR002822276
The Desert Spear (The Demon Cycle, Book 2) by Peter V. Brett
Peter V. Brett
The Demon Cycle
Used - Very Good
Paperback
HarperCollins Publishers
2011-04-28
560
0007276176
9780007276172
N/A
Book picture is for illustrative purposes only, actual binding, cover or edition may vary.
This is a used book - there is no escaping the fact it has been read by someone else and it will show signs of wear and previous use. Overall we expect it to be in very good condition, but if you are not entirely satisfied please get in touch with us.