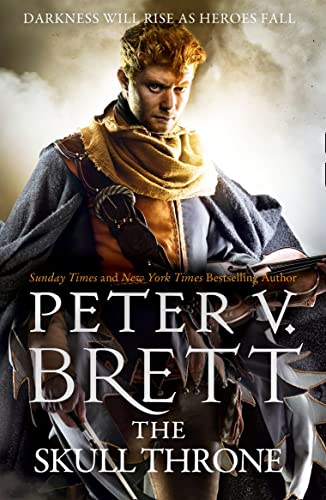 Built from the skulls of fallen generals and demon princes, the Skull Throne of Krasia is a seat of honour and powerful magic that keeps the demon corelings at bay.

From atop it, Ahmann Jardir was meant to conquer the known world, forging a unified army to end the demon war once and for all.

Arlen Bales, the Painted Man, stood against this course, challenging Jardir to a duel to the death. Rather than risk defeat, Arlen cast Jardir and himself from a precipice, opening a struggle for succession that threatens to tear the Free Cities of Thesa apart.

Renna Bales may know the fate of Arlen and Jadir, but she, too, has disappeared. Now Jardir's sons clash to claim the throne, and risk a civil war among their people. Leesha Paper and Rojer Inn struggle to unite the duchies of Angiers and Miln against the Krasians.

Caught in the crossfire, the rich and unprotected duchy of Lakton sits ripe for conquest. All the while, the corelings have grown stronger-and without Arlen and Jardir, none may be able to stop them.

GOR008754365
The Skull Throne (The Demon Cycle, Book 4) by Peter V. Brett
Peter V. Brett
The Demon Cycle
Used - Like New
Paperback
HarperCollins Publishers
2016-01-28
768
0007425694
9780007425693
N/A
Book picture is for illustrative purposes only, actual binding, cover or edition may vary.
The book has been read, but looks new. The book cover has no visible wear, and the dust jacket is included if applicable. No missing or damaged pages, no tears, possible very minimal creasing, no underlining or highlighting of text, and no writing in the margins.