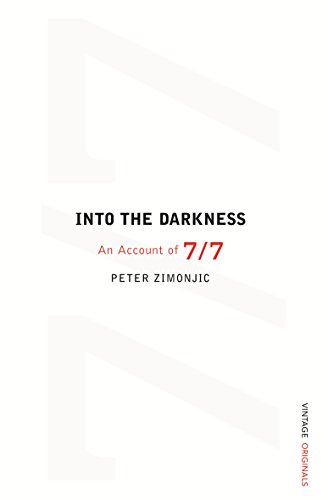 Into the Darkness:
by Peter Zimonjic

In Stock
£5.99
On the morning of 7 July 2005, Peter Zimonjic, a Canadian journalist living and working in London, was travelling on an eastbound Circle line train heading towards Edgware Road.
Very Good Good
Only 4 left

Into the Darkness: Summary

Into the Darkness:: An Account of 7/7 by Peter Zimonjic

On the morning of 7 July 2005, Peter Zimonjic, a Canadian journalist living and working in London, was travelling on an eastbound Circle line train heading towards Edgware Road. Coming in the opposite direction was a train carrying Mohammed Sidique Khan with a bag full of explosives. As the trains passed each other in the tunnel, Sidique Khan detonated his bomb. Peter's train came to a standstill and he managed to smash the window in his carriage and crawl into the carnage where he and several others spent the next hour desperately trying to help the injured and dying. Into the Darkness reconstructs the story of the day at all four bomb sites based on intensive interviews with dozens of survivors. In the form of a dramatic narrative this book documents the bravery, the triumphs, the despairs, and the shortfalls that occurred on a day when the innocence of thousands of ordinary commuters was lost forever.

Into the Darkness: Reviews

"A highly charged account of the bombings around a fusion of first person narrative and eye witness account. This has a vivid effect" * Herald *
"A minute-by-minute report of what happens when a powerful bomb explodes in a crowded Tube train during rush hour... [an] eloquent book" * Literary Review *
"In a breath-taking book, [Zimonjic] describes the bravery, triumph and despair of that terrible day" * Daily Mail *
"It gives permanent voice to the victims and unusual insight into the horrors they suffered... Poignant and compelling" * Ottawa Citizen *

Peter Zimonjic was born in Toronto in 1973. He married in Dorset, England, in 1999 and immigrated to the UK in 2003. He lives in London with his wife, Donna, and his children, Anja and Jacob, where he works as a columnist and journalist.

GOR001084783
Into the Darkness:: An Account of 7/7 by Peter Zimonjic
Peter Zimonjic
Used - Very Good
Paperback
Vintage Publishing
2008-04-22
304
0099506068
9780099506065
Short-listed for CWA John Creasey (New Blood) Dagger 2008
Book picture is for illustrative purposes only, actual binding, cover or edition may vary.
This is a used book - there is no escaping the fact it has been read by someone else and it will show signs of wear and previous use. Overall we expect it to be in very good condition, but if you are not entirely satisfied please get in touch with us.