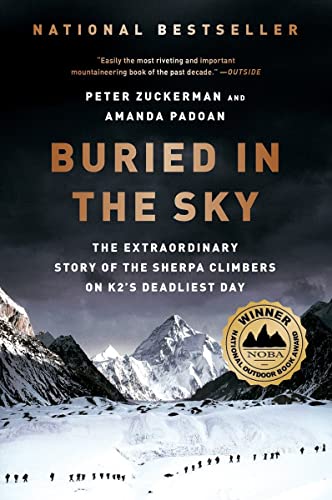 Buried in the Sky
by Peter Zuckerman

In Stock
8,49 £
Winner of the National Outdoor Book Award and the Banff Mountain Book Award for Mountain Literature

"Gripping, intense...Buried in the Sky will satisfy anyone who loved [Into Thin Air]." -Kate Tuttle, Boston Globe
Very Good
Only 3 left

Buried in the Sky Summary

Buried in the Sky: The Extraordinary Story of the Sherpa Climbers on K2's Deadliest Day by Peter Zuckerman

When eleven climbers died on K2 in 2008, two Sherpas survived. Their astonishing tale became the stuff of mountaineering legend. This white-knuckle adventure follows the Sherpas from their remote villages in Nepal to the peak of the world's most dangerous mountain, recounting one of the most dramatic disasters in alpine history from a fascinating new perspective.

Winner of the NCTE George Orwell Award and an official selection of the American Alpine Club Book Club.

Buried in the Sky Reviews

"Enthralling...phenomenal research and vivid writing create a memorable portrait not only of the events on the mountain but also of the people who make modern high-altitude climbing possible." -- Michael J. Ybarra - Wall Street Journal
"Easily the most riveting and important mountaineering book of the past decade." -- Outside
"An indispensable addition to the genre...a long-overdue historical correction to the familiar mountaineering story." -- Matthew Power - Men's Journal
"An absorbing book that goes beyond the typical mountaineering tale...This book is mesmerizing." -- Sharon Haddock - Deseret News
"It's a testament to the thrills in this book that I scoured the notes, eager to learn how the authors wrote their account...The authors' commendable documentary about the people who carry the gear is overtaken by the chilling adventure story of one terrible day on the mountain." -- Smithsonian Magazine
"This compelling story brought back from K2's slopes is a worthy tale about a little-known aspect of these high-stakes climbs." -- Colleen Kelly - Minneapolis Star Tribune
"Through phenomenal research, Zuckerman and Padoan have dug deeper than anyone else into one of the most mysterious tragedies in mountaineering history. Thanks to their efforts, the heroism and humanity of the Sherpa climbers who saved lives shine through the chaos and grief of that awful day on K2." -- David Roberts, co-author of K2: Life and Death on the World's Most Dangerous Mountain and author of Limits of the Known
"An informative and inspirational book...I couldn't put it down." -- Jamling Tenzing Norgay, son of Tenzing Norgay, author of Touching My Father's Soul
"Buried in the Sky reveals the heroic deeds of the Sherpa...[It] brings to light how immensely strong, loyal, and talented the Sherpa climbers are. Finally credit is given, where credit is due." -- Ed Viesturs, bestselling author of No Shortcuts to the Top and K2: Life and Death on the World's Most Dangerous Mountain
"I admired Buried in the Sky and enjoyed it, too. Because the authors did their homework and wrote their story well, and most of all, because credit is given at long last to those who deserve it most." -- Peter Matthiessen, author of The Snow Leopard
"The Sherpas climb off the page and carry a narrative that is as fast and as gripping as their superhuman ascents." -- Michael Kodas, author of High Crimes: The Fate of Everest in an Age of Greed

Peter Zuckerman is a non-fiction writer. He has received some of the most prestigious recognitions in American journalism. At age 26 he won the Livingston Award, the largest, all-media, general reporting prize in America. His writing has also received is the National Journalism Award and the Blethan Award. Amanda Padoan is a historian who writes about communities affected by armed conflict. She holds degrees from Harvard and University of Cambridge. Her first book, Buried in the Sky, received the National Outdoor Book Award.

GOR005168576
Buried in the Sky: The Extraordinary Story of the Sherpa Climbers on K2's Deadliest Day by Peter Zuckerman
Peter Zuckerman
Used - Very Good
Paperback
WW Norton & Co
2013-05-03
320
0393345416
9780393345414
Winner of National Outdoor Book Award 2012 Winner of NCTE George Orwell Award 2012
Book picture is for illustrative purposes only, actual binding, cover or edition may vary.
This is a used book - there is no escaping the fact it has been read by someone else and it will show signs of wear and previous use. Overall we expect it to be in very good condition, but if you are not entirely satisfied please get in touch with us.