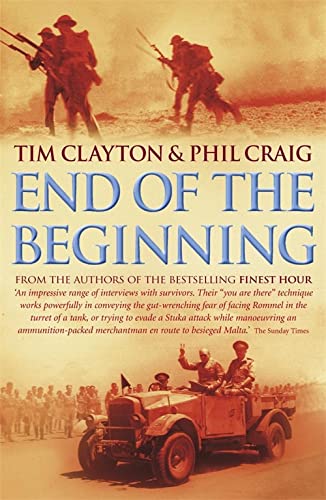 End of the Beginning
by Phil Craig

In Stock
£4.49
A vivid picture of human endeavour at a moment of great crisis in World War Two - from the authors of the highly acclaimed THE FINEST HOUR.
Very Good Good
Only 1 left

End of the Beginning Summary

End of the Beginning by Phil Craig

1942 - British troops are stranded in the desert, struggling to hold back Rommel's Afrika Corps. Hitler's armies have reached Moscow, and there are murmurs of discontent at home as new doubts emerge about Churchill's leadership. Elsewhere in Europe there is chilling evidence of the mounting persecution of the Jews, stretching from Poland to the Channel Islands. For many, it seems there is little hope. As in their acclaimed bestseller FINEST HOUR, the authors use the personal testimony of ordinary people to tell the story of the war at a moment of great crisis. In END OF THE BEGINNING we meet again some of the people first encountered in FINEST HOUR, and get to know many more. Troops fighting for Montgomery in the desert, RAF pilots bombing German towns, a young Jewish woman deported to Auschwitz from Guernsey, the reality of the Home Front - these stories and many more paint a vivid picture of human endeavour in time of war. And, sixty years on from the Battle of Alamein, END OF THE BEGINNING tells the controversial truth about one of the most famous battles in history - the importance of its lesser-known predecessor and the months of bitter in-fighting between the Allied generals. With precision and compassion, Phil Craig and Tim Clayton again debunk the myths and explore the realities of a crucial year in the history of Britain.

End of the Beginning Reviews

This is a splendid book, well worth reading along with official histories, for it puts many of the facts into the experiences of ordinary men and women caught up in an unwanted but neccessary war. * Yorkshire Gazette & Herald *
An impressive range of interviews with survivors. Their "you are there" technique works powerfully in conveying the gut-wrenching fear of facing Rommel in the turet of a tank, or trying to evade a Stuka attack while manoeuvring an ammunition-packed merchantman en route to beseiged Malta. * The Sunday Times *
They are accomplished listeners and have blended together eyewitness accounts to produce an exciting narrative. * Daily Mail *
Praise for FINEST HOUR: 'Brilliant...should form part of the National Curriculum.' * Daily Mail *
a remarkable story of determined, against-the-odds resistance...you have to search long and hard to find one with this kind of richness in the reporting and craftsmanship in the telling. * Chicago Herald Tribune *
From fighter pilots risking their lives in the skies above England, to squaddies stranded at Dunkirk, to schoolgirls sent abroad to Canada (the book is worth buying just for Bess Walder's account of horror and redemption aboard the City of Benares), this is riveting. * Sunday Express *
Personally compelling and politically revealing. * New York Times *
Compelling...Mesmerising stuff. * Sunday Telegraph *

Phil Craig: Phil Craig, the creator of the Finest Hour TV series, is a distinguished independent producer of political and historical documentaries., Tim Clayton: Tim Clayton has written extensively on nineteenth and twentieth-century cultural history. He is a producer on the Finest Hour series.

GOR003619934
End of the Beginning by Phil Craig
Phil Craig
Used - Very Good
Paperback
Hodder & Stoughton
2003-06-09
448
0340766816
9780340766811
N/A
Book picture is for illustrative purposes only, actual binding, cover or edition may vary.
This is a used book - there is no escaping the fact it has been read by someone else and it will show signs of wear and previous use. Overall we expect it to be in very good condition, but if you are not entirely satisfied please get in touch with us.