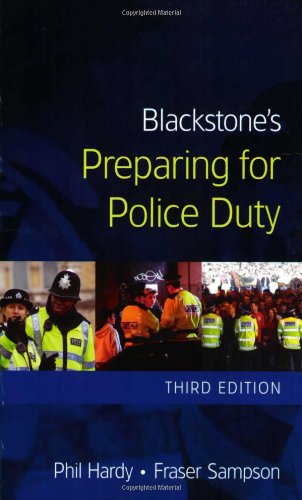 In Stock
£4.49
This fully revised, third edition of the successful Blackstone's Preparing for Police Duty informs those interested in a career in the police about the general culture of the policing world; IPLDP training; the extended police family; dress-code; shift patterns; equipment and police powers. The ideal introduction to the police service.
Very Good
Only 2 left

This is a fully revised third edition of the very successful Blackstone's Preparing for Police Duty, the invaluable introduction to the police service for new recruits or those considering a policing career. The book has been fully revised to include increased coverage of race and diversity issues and information on neighbourhood policing and community partnerships. The authors also offer an explanation of how the police fit into the Criminal Justice System, outlining the role of the Crown Prosecution Service in the investigative and charging process. This new edition also outlines changes to key legislation such as the Fraud Act 2006 and takes into account the new police regulations, changes concerning Skills for Justice, and NPIA expansion. Preparing for Police Duty informs student police officers and those interested in a career in the police, about the general culture of the policing world; the extended police family, dress-code, badges, shift patterns, equipment and basic information on police powers in relation to the most common crimes.Informative and inspirational quotes from different ranks of police officers are interspersed throughout to give advice and tips on joining and working for the police service. For example: Why did you join? What are your favourite parts of the job? There are also a number of box features including diagrams, checklists and good practice with examples from selected police forces. Accessible, motivational and very informative - anyone who is considering or has secured a career in the police service, should buy a copy.

Fraser Sampson, LLB, LLM, MBA is Chief Executive of the West Yorkshire Police Authority. Formerly Chief Executive of the Civil Nuclear Constabulary and a superintendent and Head of the National Police Training Examinations and Assessment Unit, he is a highly respected authority on police law. He is Consultant Editor of the Blackstone's Police Manuals and on the Blackstone's Police Operational Handbook.
Phil Hardy BSc (Hons) PGCE teaches advanced learning skills to both students and trainers. Before retiring in 2006, he was head of Foundation Training for Sussex Police, responsible for the force's implementation of the IPLDP.

Foreword by Peter Neyroud, Chief Executive of the NPIA; PART 1: THE POLICE; 1. In the Office of Constable; 2. History and Structure of Policing; 3. The Tripartite Structure; 4. Force Structure and Organisation; 5. The Police Family; PART 2: THE JOB; 6. A Police Officer's Job; 7. What It Is Like; 8. Reality Check; PART 3: RECRUITING AND TRAINING; 9. The Selection Process; 10. Initial Training; 11. Experience and Reflect; 12. Continuous Professional Development; PART 4: POLICING POWERS; 13. Human Rights and Police Powers; 14. Powers of Arrest; 15. Stop and Search; 16. Law and Order; 17. A Quick Lesson in Crime; 18. Law and Order: A Closer Look; Appendix 1 Glossary of Police Terms; Appendix 2 The Phonetic Alphabet

GOR002632894
Blackstone's Preparing for Police Duty by Phil Hardy
Phil Hardy
Used - Very Good
Paperback
Oxford University Press
2008-12-11
256
0199561192
9780199561193
N/A
Book picture is for illustrative purposes only, actual binding, cover or edition may vary.
This is a used book - there is no escaping the fact it has been read by someone else and it will show signs of wear and previous use. Overall we expect it to be in very good condition, but if you are not entirely satisfied please get in touch with us.