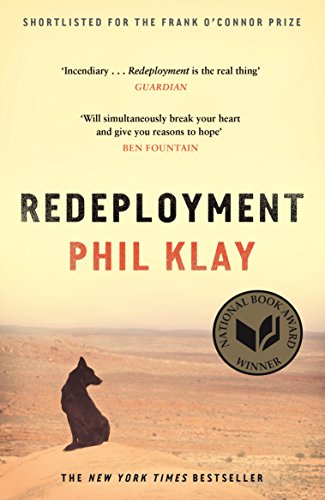 WINNER OF THE NATIONAL BOOK AWARD SHORTLISTED FOR THE FRANK O'CONNOR PRIZE LONGLISTED FOR THE WARWICK PRIZE How do you comfort a man who has just lost his best friend? How does it feel to see fear in your wife's eyes? How does it feel to come home? REDEPLOYMENT takes readers to the frontlines of the wars in Iraq, asking us to understand what happened there, and what happened to the soldiers who returned.

Redeployment is a quick but powerful and, for me, painful set of stories about the experience of ordinary soldiers in Iraq -- BARACK OBAMA
A must-read -- Anthony Swofford, author of JARHEAD
Will simultaneously break your heart and give you reasons to hope -- Ben Fountain
One of the great story collections of recent times -- Colum McCann
After the first reading I immediately began the second . . . Truly haunting, and truly, indisputably, brilliant -- NIALL GRIFFITHS
These are gorgeous stories - fierce, intelligent and heart-breaking -- Roxana Robinson, author of SPARTA
Stunning, upsetting, urgently necessary -- Karen Russell, author of SWAMPLANDIA!
It hooks you in and doesn't let you go -- JAMES ROBERTSON, author of The Testament of Gideon Mack
Provocative and haunting . . . Phil Klay is a powerful new voice and Redeployment stands tall with the best war writing of this decade -- SIOBHAN FALLON, author of You Know When the Men Are Gone
Achingly beautiful * * Financial Times * *
Redeployment is fiction of a very high order. These are war stories, written with passion and urgency and consummate writerly skill. There's a clarity here that's lacerating in its precision and exhilarating in its effects -- Patrick McGrath
Hilarious, biting and sad. It's the best thing written so far on what the war did to people's souls * * Scotsman * *
Redeployment is the real thing - a vivid and vital battery of war stories that does not rely soley on its subject matter for impact (although, make no mistake, the subject certainly has impact) * * Guardian * *
Certain to be hailed as a classic * * Shortlist * *
Brilliant * * Sunday Telegraph * *
Klay's achievement is to implicate his reader in the desire for war, while reminding us how readily we disown and forget it. Journalism would call this dynamic. But only fiction can do the unsettling work of enacting it * * Prospect * *
A bracing collection * * Time Magazine * *
Sharp, intelligent, compelling * * Irish Times * *
This story is not just a blackly brilliant study of an incompetent bureaucracy where even good actions on the ground make things worse: it also serves as an emotional breather for the reader. Because - unlike the deluded, Rambo-esque contractor - in most of these stories we do hit the ground running, in a hail of bullets, explosions and the terror that comes from Knowing that death perpetually stalks these characters in the form of snipers, suicide bombers and landmines * * Sunday Business Post * *
[Klay] instinctively plays off the rough soldierly humour against the dark realities it has always been intended to deal with, but he approaches the heavier (read 'predictable') issues at a cautious angle * * Literary Review * *
Literary fiction from the global war on terror has only recently begun to give these soldiers a voice, and Redeployment is an important addition to the genre. Frequently, however, the best reason to read these taut, sharply observed stories is simply to see how they end * * Financial Times * *
Klay's short stories pull off something incredibly subtle * * Sunday Times * *
In Klay's hands, Iraq comes across not merely as a theater of war but as a laboratory for the human condition in extremis * * New York Times * *

Phil Klay is a veteran of the US Marine Corps. He served in Iraq during the surge and subsequently received an MFA from Hunter College. His work has featured in the New York Times, Tin House and Granta. Redeployment is his first book and was a New York Times Best Seller and won the National Book Award and was shortlisted for the Frank O'Connor Prize 2014.