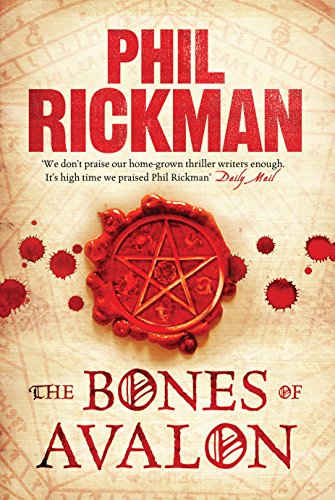 The Bones of Avalon
by Phil Rickman

Used Price
£3,49
New RRP £9,99
Free Shipping in the UK
The compelling first instalment of The John Dee Papers. Religious strife, Glastonbury legends, the bones of King Arthur and the curse of the Tudors... can astrologer John Dee help the young Queen Elizabeth to avoid it?
Reviews:
Trustpilot
Very Good Good

The Bones of Avalon Summary

The Bones of Avalon by Phil Rickman

It is 1560, and Elizabeth Tudor has been on the throne for a year. Dr John Dee, at 32 already acclaimed throughout Europe, is her astrologer and consultant in the hidden arts... a controversial appointment in these days of superstition and religious strife.

Now the mild, bookish Dee has been sent to Glastonbury to find the missing bones of King Arthur, whose legacy was always so important to the Tudor line. With him - hardly the safest companion - is his friend and former student, Robert Dudley, a risk-taker, a wild card... and possibly the Queen's secret lover.

The famously mystical town is still mourning the gruesome execution of its Abbot, Richard Whiting. But why was the Abbot really killed? What is the secret held by the monks since the Abbey was founded by Joseph of Arimathea, uncle of Christ and guardian of the Holy Grail?

The mission takes Dee to the tangled roots of English magic, into unexpected violence, necromantic darkness, the breathless stirring of first love... and the cold heart of a complex plot against Elizabeth.

THE FIRST INSTALMENT IN THE JOHN DEE PAPERS

Customer Reviews - The Bones of Avalon

The Bones of Avalon Reviews

Chills, thrills and satisfies. A fabulous read. * Huffington Post *
A historical thriller with a touch of romance and more than a hint of necromancy... Brilliantly imagined and grippingly executed. * The Times *
We don't praise our home-grown thriller writers enough, it's high time we praised Phil Rickman. * Daily Mail *
No-one writes better than Phil Rickman of the shadow-frontier between the supernatural and the real world. -- Bernard Cornwell

Phil Rickman was born in Lancashire and lives on the Welsh border where he writes and presents the book programme Phil the Shelf on BBC Radio Wales. He is the acclaimed author of Dr Dee, The Bones of Avalon, Midwinter Spirit (now a major ITV series), the Merrily Watkins Mysteries and the John Dee papers. Visit his website at: www.philrickman.co.uk

GOR002242333
The Bones of Avalon by Phil Rickman
Phil Rickman
The John Dee Papers
Used - Very Good
Paperback
Atlantic Books
2010-10-01
542
1848872720
9781848872721
N/A
Book picture is for illustrative purposes only, actual binding, cover or edition may vary.
This is a used book - there is no escaping the fact it has been read by someone else and it will show signs of wear and previous use. Overall we expect it to be in very good condition, but if you are not entirely satisfied please get in touch with us.