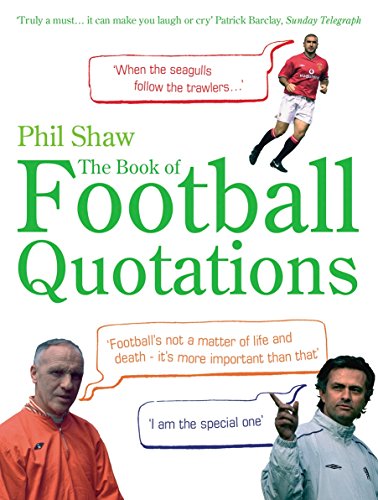 The Book of Football Quotations
by Phil Shaw

In Stock
£3.59
A collection of quotes from people - Shakespeare to Shankly, Camus to Cantona, Busby to Beckham - who has made an apt, pithy or comical comment about football.
Very Good
Only 2 left

The Book of Football Quotations Summary

The Book of Football Quotations by Phil Shaw

This eighth edition includes quotes from everyone - Shakespeare to Shankly, Camus to Cantona, Busby to Beckham - who has made an apt, pithy or comical comment about football. And not just footballers and managers either - fans, pundits, groundsmen, directors and wives all get to have their say too. Every subject is covered - from tactical debates to changing lifestyles - to produce a sometimes hilarious and always thought-provoking commentary on the game. Anyone who thought 'sick as a parrot' and 'over the moon' was as profound as it got, will be pleasantly surprised by the elegance and insight on display. Contributions include gems from all the old masters: Cloughie, Tommy Docherty, Jimmy Greaves and George Best. And new quotes from the likes of Wayne Rooney, Cristiano Ronaldo, Didier Drogba, John Terry, Cesc Fabregas, Steven Gerrard, Joey Barton, Jose Mourinho, Ian Holloway, Rafa Benitez, Delia Smith and Simon Jordan. 'Footballers are no different from human beings' - Graham Taylor 'I'm a Nigerian and I will remain a Nigerian until I die' - Kanu 'The girls like Frank Lampard and I'd see something in him if I was that way' - John Terry 'I didn't watch the England v Argentina game in 1998 - it was past my bed-time' - Theo Walcott 'My ankle injury is a real pain in the arse' - David Prutton 'Five per cent of me's disappointed to finish second, but the other 50 per cent is happy we've qualified' - Michael Owen 'Wayne Rooney has signed a deal to do five books, which is an awful lot of crayons' - Radio DJ Johnnie Walker

The Book of Football Quotations Reviews

"Truly a must... it can make you laugh or cry" * Sunday Telegraph *
"It should be on the shelf of everyone who loves football" * The Times *
"Shaw has drawn together a fine catalogue of comical observations for a book to which enthusiasts will return regularly for comical stimulation" * Scotland on Sunday *
"An essential work whose previous offerings have entered the lore and language of the game" -- Simon Barnes * The Times *
"Still the funniest of such collections" * Time Out *

Phil Shaw is a sports journalist who has written for the Daily Telegraph, Independent, Guardian, Observer and Time Out. He has compiled eight editions of The Book of Football Quotations over the past 25 years, the first five in collaboration with the late Peter Ball. Among the major sporting events on which he has reported are five World Cups and four European Championships. A self-confessed professional Yorkshireman, Phil now lives in Staffordshire with his wife, son and daughter.

GOR001212601
The Book of Football Quotations by Phil Shaw
Phil Shaw
Used - Very Good
Paperback
Ebury Publishing
2008-03-06
576
0091923336
9780091923334
N/A
Book picture is for illustrative purposes only, actual binding, cover or edition may vary.
This is a used book - there is no escaping the fact it has been read by someone else and it will show signs of wear and previous use. Overall we expect it to be in very good condition, but if you are not entirely satisfied please get in touch with us.