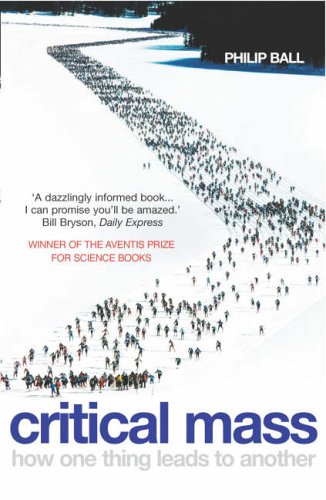 In Stock
£3,99
Is there a 'physics of society'? Ranging from Hobbes and Adam Smith to modern work on traffic flow and market trading, and across economics, sociology and psychology, this title shows how much we can understand of human behaviour when we cease to try to predict and analyse the behaviour of individuals.
Very Good
7 in stock

Is there a 'physics of society'? Philip Ball's investigation into human nature ranges from Hobbes and Adam Smith to modern work on traffic flow and market trading, across economics, sociology and psychology. Ball shows how much of human behaviour we can understand when we cease trying to predict and analyse the behaviour of individuals and look to the impact of hundreds, thousands or millions of individual human decisions, in circumstances in which human beings both co-operate and conflict, when their aggregate behaviour is constructive and when it is destructive. By perhaps Britain's leading young science writer, this is a deeply thought-provoking book, causing us to examine our own behaviour, whether in buying the new Harry Potter book, voting for a particular party or responding to the lures of advertisers.

"Exquisitely produced and painstakingly researched... Ball writes patiently and eloquently.. Exciting... A rousing call-to-arms, and an elegant answer to the shallow tradition of British empiricism." * Independent *
"In his fascinating new book, Critical Mass, Philip Ball tells the story of this research in a comprehensive and often captivating way... Ball delves far beyond today's headlines... Impressively clear and breathtaking in scope... Substantial, impeccably researched and...persuasive. For anyone who would like to learn about the intellectual ferment at the surprising junction of physics and social science, Critical Mass is the place to start." * Nature *
"Lucid, accessible and engaging... Ball makes a persuasive, comprehensive case and it's a welcome antidote to popular individualistic thought." * Glasgow Herald *
"Critical Mass fizzes with ideas and insights" * The Guardian *
"more than a book, this in an intellectual curiosity" * Independent on Sunday *

Philip Ball writes regularly in the scientific and popular media and worked for many years as an editor for physical sciences at Nature. His books cover a wide range of scientific and cultural phenomena, and include Critical Mass: How One Thing Leads To Another (winner of the 2005 Aventis Prize for Science Books), The Music Instinct, Curiosity: How Science Became Interested in Everything, Serving The Reich: The Struggle for the Soul of Science Under Hitler and Invisible: The history of the Unseen from Plato to Particle Physics.

GOR001219922
Critical Mass by Philip Ball
Philip Ball
Used - Very Good
Paperback
Cornerstone
2005-02-03
656
0099457865
9780099457862
Winner of Aventis General Prize for Science Books 2005
Book picture is for illustrative purposes only, actual binding, cover or edition may vary.
This is a used book - there is no escaping the fact it has been read by someone else and it will show signs of wear and previous use. Overall we expect it to be in very good condition, but if you are not entirely satisfied please get in touch with us.