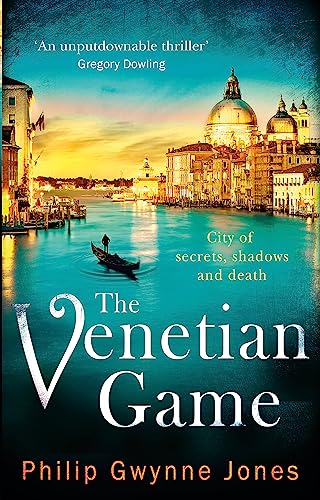 Used Price
£4.19
New RRP £8.99
Free Shipping in the UK
For fans of Joseph Kanon, Donna Leon and Abir Mukherjee comes a fantastic new thriller, The Venetian Game. Set in one of the most beautiful cities on earth, a mild mannered English consul is drawn into a web of deadly secrets and lies
Reviews:
Trustpilot
Like New Very Good

The Venetian Game: a haunting thriller set in the heart of Italy's most secretive city by Philip Gwynne Jones

'It is no surprise to find that Philip Gwynne Jones lives in Venice... art and architecture interweave into a story that builds to an almost surreal climax' Daily Mail

A game of cross and double-cross in Venice, one of the most beautiful cities on earth.

From his office on the Street of the Assassins, Nathan Sutherland enjoys a steady but unexciting life translating Italian DIY manuals. All this changes dramatically when he is offered a large sum of money to look after a small package containing an extremely valuable antique prayer book illustrated by a Venetian master. But is it a stolen masterpiece - or a brilliant fake?

Unknown to Nathan, from a vast mansion on the Grand Canal twin brothers Domenico and Arcangelo Moro, motivated by nothing more than mutual hatred, have been playing out a complex game of art theft for twenty years. And now Nathan finds himself unwittingly drawn into their deadly business . . .

'Sinister and shimmering, The Venetian Game is as haunting and darkly elegant as Venice itself' L.S. Hilton, bestselling author of Maestra

'Clever and great fun' The Times

Sinister and shimmering, The Venetian Game is as haunting and darkly elegant as Venice itself -- L.S. Hilton, bestselling author of Maestra
Clever and great fun * The Times *
...a playful novel, recounted by a witty and engaging narrator ... as Venetian as a painting by Bellini (or a glass of Bellini). Oh, and it's also an unputdownable thriller -- Gregory Dowling, author of Ascension
A crime book for people with sophisticated tastes: Venice, opera, renaissance art, good food and wine... I enjoyed all that and more * The Crime Warp *
It is no surprise to find that Philip Gwynne Jones lives in Venice... art and architecture interweave into a story that builds to an almost surreal climax * Daily Mail *

Philip Gwynne Jones was born in South Wales in 1966, and lived and worked throughout Europe before settling in Scotland in the 1990s. He first came to Italy in 1994, when he spent some time working for the European Space Agency in Frascati, a job that proved to be less exciting than he had imagined.

He spent twenty years in the IT industry before realising he was congenitally unsuited to it. Furthermore, an attempt to find a secure, well-paid job with a proper pension had resulted in him finding himself in the IT department of a large Scottish bank during the global financial crisis.

Something, clearly, had to change. And so it was that - following a conversation with a man in a pub - Philip and Caroline left their jobs, sold their flat and moved to Venice in search of a better, simpler future. They were wrong about the 'simpler' bit . . .

Philip now works as a teacher, writer and translator, and lives in Venice with Caroline. He enjoys cooking, art, classical music and opera; and can occasionally be seen and heard singing bass with Cantori Veneziani and the Ensemble Vocale di Venezia.

GOR009048940
The Venetian Game: a haunting thriller set in the heart of Italy's most secretive city by Philip Gwynne Jones
Philip Gwynne Jones
Used - Like New
Paperback
Little, Brown Book Group
2017-03-02
320
1472123972
9781472123978
N/A
Book picture is for illustrative purposes only, actual binding, cover or edition may vary.
This is a used book - there is no escaping the fact it has been read by someone else and it will show signs of wear and previous use. Overall we expect it to be in very good condition, but if you are not entirely satisfied please get in touch with us.