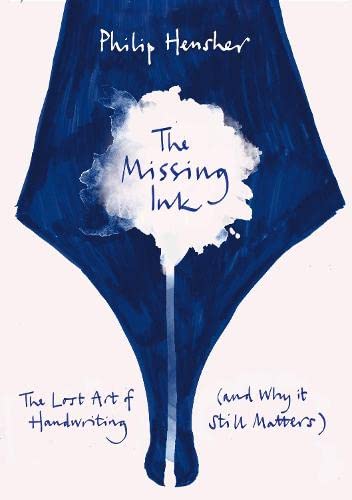 The Missing Ink
by Philip Hensher

In Stock
£3.29
A smart, funny book about the rise and slow death of the art of handwriting; and why it still matters
Very Good
Only 2 left

The Missing Ink: The Lost Art of Handwriting, and Why it Still Matters by Philip Hensher

'The wisest and wittiest argument imaginable for the preservation of handwriting. I have learnt so much, and by it have been so happily entertained, that I am compelled to recommend it to everyone.' Diana Athill

The simple pleasure of picking up a pen and writing is a skill that has existed for thousands of years - but that skill is slowly dying. Where once we would have reached for a pen and paper to commit our innermost thoughts to a diary, to send a letter home or to slip a note to a loved one, instead we now stare at tiny screens, typing with our thumbs. And all that typing looks the same.

The Missing Ink is a book about the characters who shaped our handwriting, and how it in turn shaped us. From Victorian idealists, preaching the moral worth of italic copperplate, to great modern educational reformists such as Marion Richardson, throughout history the style in which we write has influence the way we learn, behave and communicate.

But this is also a book about the physical act itself: about the pots of ink, treasured pens and chewable Biros that we used to take for granted, and whether the style of our writing really does reveal anything about our true selves. Hugely entertaining, witty and thought-provoking, The Missing Ink is itself a love letter to the warmest of technologies, and the place it still has in our lives.

Philip Hensher was born in 1965 in South London, where he still lives. His nine books include Kitchen Venom, which won the Somerset Maugham Award, The Northern Clemency, which was shortlisted for the Man Booker Prize, King of the Badgers, and, in April 2012, Scenes from Early Life. He is a regular contributor to the Independent, the Mail on Sunday, and the Spectator.

GOR004400008
The Missing Ink: The Lost Art of Handwriting, and Why it Still Matters by Philip Hensher
Philip Hensher
Used - Very Good
Hardback
Pan Macmillan
2012-10-11
288
0230767125
9780230767126
N/A
Book picture is for illustrative purposes only, actual binding, cover or edition may vary.
This is a used book - there is no escaping the fact it has been read by someone else and it will show signs of wear and previous use. Overall we expect it to be in very good condition, but if you are not entirely satisfied please get in touch with us.