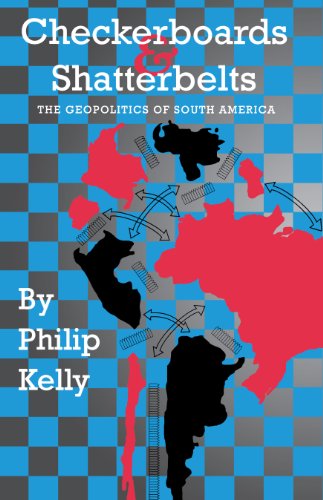 Checkerboards and Shatterbelts
by Philip Kelly

In Stock
£6.99
The geopolitics of South America, a continent where relative isolation from the power centers in North America and Eurasia and often forbidding internal terrain have given rise to a fascinating geopolitical structure.
Very Good
Only 2 left

Checkerboards and Shatterbelts: The Geopolitics of South America by Philip Kelly

Geography has always played a major role in world politics. In this study, Philip Kelly maps the geopolitics of South America, a continent where relative isolation from the power centers in North America and Eurasia and often forbidding internal terrain have given rise to a fascinating and unique geopolitical structure.

Kelly uses the geographical concepts of "checkerboards" and "shatterbelts" to characterize much of South America's geopolitics and to explain why the continent has never been unified nor dominated by a single nation. This approach accounts for both historical relationships among South American countries and for such current situations as Brazil's inability to extend its authority across the continent from Atlantic to Pacific, its traditional competition with Argentina, its territorial expansion toward the continental heartlands, its encirclement by neighbors fearful of such expansion, and its recent rapprochement with Argentina.

An important component of this book is the incorporation of the thinking and writing of South American geopolitical analysts, which leads to an interesting inventory of viewpoints on frontier conflicts, territorial expansion, industrial development, economic cooperation, and United States and European relations. Kelly's findings will be important reading for geographers, political scientists, and students and scholars of Latin American history.

"[A] timely and significant contribution to the literature of international relations, history, geography, politics and economics of the region." * The Americas *

Philip L. Kelly is Chair of the Division of Social Sciences and Professor of Political Science at Emporia State University in Emporia, Kansas.

GOR009958731
Checkerboards and Shatterbelts: The Geopolitics of South America by Philip Kelly
Philip Kelly
Used - Very Good
Paperback
University of Texas Press
1996-11-30
252
0292743289
9780292743281
N/A
Book picture is for illustrative purposes only, actual binding, cover or edition may vary.
This is a used book - there is no escaping the fact it has been read by someone else and it will show signs of wear and previous use. Overall we expect it to be in very good condition, but if you are not entirely satisfied please get in touch with us.