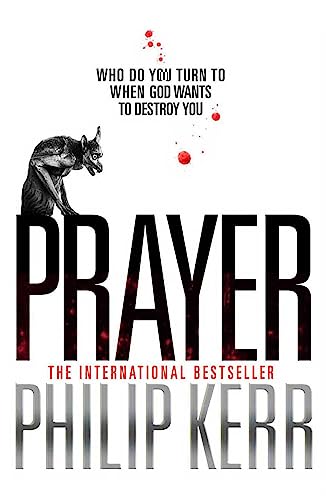 Used Price
£4.99
New RRP £9.99
Free Shipping in the UK
Special Agent Gil Martins is a religious man who is losing his faith; the very nature of his job has led him to question the existence of a God who could allow the things that Gil sees every day, but then his new-found atheism is challenged... A chilling modern horror story that asks: who do you turn to when God wants to destroy you?
Reviews:
Trustpilot
Very Good Good

A chilling modern horror story in which the source of the horror is totally unexpected - and utterly terrifying. Special Agent Gil Martins investigates domestic terrorism for the Houston FBI. Once a religious man, now his job makes him question the existence of a God who could allow the violence he sees every day. Gil is asked to investigate a series of unexplained deaths of victims known for their liberal views. When a woman tells Gil that these men have been killed by prayer, he questions her sanity. Yet the evidence mounts that there might be something in what she says, even more so when Gil finds that his own life is on the line.

'A cracking thriller ... the story unfolds at a white-knuckle pace with a sense of the unknown that is genuinely disturbing' The Times. * The Times *
'A high-concept novel tackled in unabashed fashion' Independent. * Independent *
'Gripping' Sunday Mirror. * Sunday Mirror *
'Tantalisingly creepy ... genuinely scary ... satisfyingly malign' Observer. * Observer *

Philip Kerr has written over thirty books of which the best-known are the internationally renowned and bestselling Bernie Gunther series. The sixth book in the series, If the Dead Rise Not, won the CWA Historical Dagger. His other works include several standalone thrillers, non-fiction and an acclaimed series for younger readers, The Children of the Lamp. Philip died in March 2018, days before the publication of his 13th Bernie Gunther thriller, Greeks Bearing Gifts. He was made a Fellow of the Royal Society of Literature shortly before his death.

GOR005931854
Prayer by Philip Kerr
Philip Kerr
Used - Very Good
Paperback
Quercus Publishing
2014-07-03
448
1782065768
9781782065760
N/A
Book picture is for illustrative purposes only, actual binding, cover or edition may vary.
This is a used book - there is no escaping the fact it has been read by someone else and it will show signs of wear and previous use. Overall we expect it to be in very good condition, but if you are not entirely satisfied please get in touch with us.