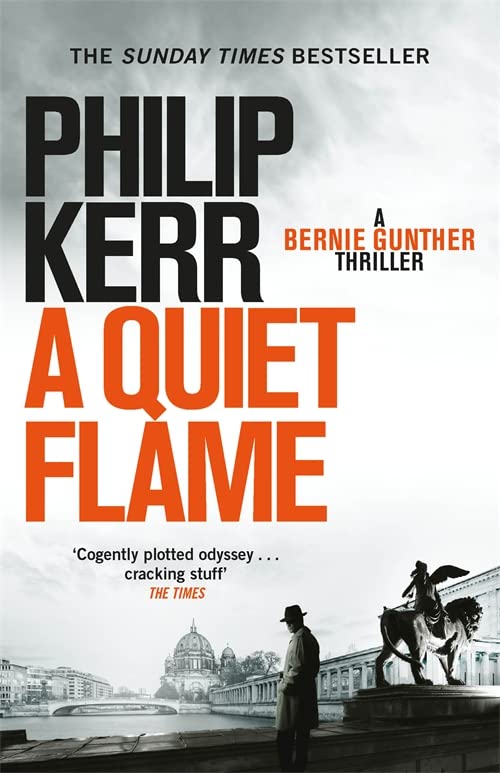 A Quiet Flame
by Philip Kerr

'One of the greatest anti-heroes ever written' LEE CHILD

Posing as an escaping Nazi war-criminal Bernie Gunther arrives in Buenos Aires and, having revealed his real identity to the local chief of police, discovers that his reputation as a detective goes before him.

A young girl has been murdered in peculiarly gruesome circumstances that strongly resemble Bernie's final case as a homicide detective with the Berlin police. A case he had failed to solve.

Circumstances lead the chief of police in Buenos Aires to suppose that the murderer may be one of several thousand ex Nazis who have fetched up in Argentina since 1945. And, therefore, who better than Bernie Gunther to help him track that murderer down?

Kerr brilliantly evokes the edgy atmosphere of the post-war period in one of the most gripping and accomplished detective novels published this year - Sunday Times * Sunday Times *
One of the great achievements of contemporary crime fiction...powerful and impressive - Observer * Observer *
Cogently plotted odyssey....cracking stuff - The Times * The Times *
'The scope and breadth of Philip Kerr's historical research, and the subtle complexity of plot structure, are worthy of Le Carre. The fast-paced, crack-a-minute delivery smacks of Chandler. The comparisons are inevitable, but Kerr parries the plaudits with ease' Irish Examiner.

Philip Kerr has written over thirty books of which the best-known are the internationally renowned and bestselling Bernie Gunther series. The sixth book in the series, If the Dead Rise Not, won the CWA Historical Dagger. His other works include several standalone thrillers, non-fiction and an acclaimed series for younger readers, The Children of the Lamp. Philip died in March 2018, days before the publication of his 13th Bernie Gunther thriller, Greeks Bearing Gifts. He was made a Fellow of the Royal Society of Literature shortly before his death.

GOR001246316
A Quiet Flame: Bernie Gunther Thriller 5 by Philip Kerr
Philip Kerr
Bernie Gunther
Used - Very Good
Paperback
Quercus Publishing
2008-10-02
448
1847245587
9781847245588
Short-listed for CWA Ellis Peters Historical Dagger 2008
Book picture is for illustrative purposes only, actual binding, cover or edition may vary.
This is a used book - there is no escaping the fact it has been read by someone else and it will show signs of wear and previous use. Overall we expect it to be in very good condition, but if you are not entirely satisfied please get in touch with us.