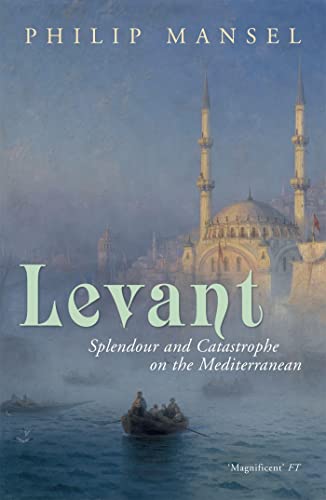 Levant: Splendour and Catastrophe on the Mediterranean by Philip Mansel

Levant is a book of cities. It describes Smyrna, Alexandria and Beirut when they were windows on the world, escapes from nationality and tradition, centres of wealth, pleasure and freedom.

Using unpublished family papers, Philip Mansel describes their colourful, contradictory history, from the beginning of the French alliance with the Ottoman Empire in the sixteenth century to their decline in the mid twentieth century. Smyrna was burnt; Alexandria Egyptianised; Beirut lacerated by civil war.

'Fascinating . . . the strengths of the book are colossal. Philip Mansel's knowledge of the history and culture of these places is encyclopaedic; he has walked their streets, met the scions of their famous families and penetrated their private archives. His eye for detail is sharp; telling anecdotes are culled from memoirs of all kinds, and the sights and smells of each city are vividly conjured up . . . To anyone who has read Mansel's Constantinople: City of the World's Desire, it will be sufficient to say: read this one too. To anyone who has not, I can only say: read both of them' * Noel Malcolm, Sunday Telegraph *
'Excellent . . . thought-provoking . . . thoroughly researched . . . One of its strengths lies in the colourful quotations from letters, diaries and travel narratives' * Giles Milton, Literary Review *
'Philip Mansel's impressive return to the Middle East . . . Instead of composing an elegy on a once powerful civilisation, Mansel has given the Levantine world its chronicle, and restored its weight in history' * Jason Goodwin, Spectator *
'I could scarcely put down this magnificent book, with its galloping narrative, its worldly analysis, sparkling anecdotes and its unforgettable cast of the decadent, the cosmopolitan and the cruel' * Simon Sebag-Montefiore, Financial Times *
'With sober judgement but passionate feeling, Mansel has produced a work of formidable scholarship and subtlety, rich in colour, sights, personalities and horrifyingly abundant incident. Levant shows the destructivness of nationalism, offers precepts for the coexistence of Muslims, Christians and Jews and has wisdom and sensibility all of its own' * Richard Davenport-Hines, TLS *
'Philip Mansel's Levant . . . comes from the pen which, more sharply than any other, has delineated Istanbul. Here, with evocations of Smyrna, Alexandria and Beirut, all of which he knows well, Mansel gives us history, travel-writing and evocation of place with spare lack of sentimentality, but passionate intensity. The chapters on Beirut, in the light of what is continuing there to this sad hour, are especially poignant. Highly recommended' * A. N. Wilson, New Statesman *
'Elegiac' * Independent Christmas history round-up *
'An engrossing, historical tapestry' * Philip Adair, Scotsman *
'A highly enjoyable and intricately worked account of three great Mediterranean ports . . . [Mansel has] a sharp eye for detail and a deep understanding of the dynamics of traditional empires and societies' * The Economist *
'A masterly work . . . prodigious' * Independent *
'An excellent study' * Guardian *
'An enthralling history of Alexandria, Beirut and Smyrna, those vanished worlds of cosmopolitan high culture and society' * Daily Telegraph *

Philip Mansel is a historian of France and the Ottoman Empire. He has written histories of Constantinople and nineteenth-century Paris, as well as biographies of Louis XVIII and the Prince de Ligne. Six of his books have been translated into French. He writes for the Art Newspaper, the Times Literary Supplement and The Spectator. While writing Levant, he lived in Beirut and Istanbul. In 2012 Philip Mansel was awarded the prestigious London Library Life in Literature Award in recognition of the quality of both his writing and his scholarship.

GOR003643551
Levant: Splendour and Catastrophe on the Mediterranean by Philip Mansel
Philip Mansel
Used - Very Good
Paperback
Hodder & Stoughton General Division
2011-09-29
480
0719567084
9780719567087
N/A
Book picture is for illustrative purposes only, actual binding, cover or edition may vary.
This is a used book - there is no escaping the fact it has been read by someone else and it will show signs of wear and previous use. Overall we expect it to be in very good condition, but if you are not entirely satisfied please get in touch with us.