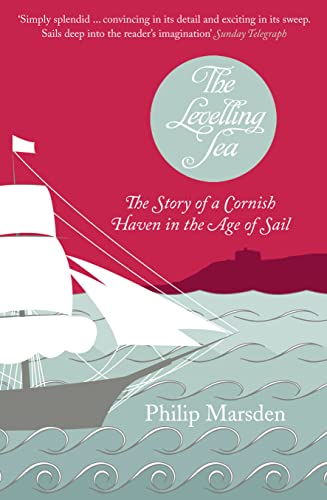 The Levelling Sea
by Philip Marsden

The story of Britain's colourful maritime past seen through the changing fortunes of the Cornish port of Falmouth.

The Levelling Sea: The Story of a Cornish Haven and the Age of Sail by Philip Marsden

The story of Britain's colourful maritime past seen through the changing fortunes of the Cornish port of Falmouth.

Within the space of few years, during the 1560s and 1570s, a maritime revolution took place in England that would contribute more than anything to the transformation of the country from a small rebel state on the fringes of Europe into a world power. Until then, it was said, there was only one Englishman capable of sailing across the Atlantic. Yet within ten years an English ship with an English crew was circumnavigating the world.

At the same time in Cornwall, in the Fal estuary, just a single building - a lime kiln - existed where the port of Falmouth would emerge. Yet by the end of the eighteenth century, Falmouth would be one of the busiest harbours in the world.

`The Levelling Sea' uses the story of Falmouth's spectacular rise and fall to explore wider questions about the sea and its place in history and imagination. Drawing on his own deep connection with Cornwall, award-winning author Philip Marsden writes unforgettably about the power of the sea and its ability to produce greed on a piratical scale, dizzying corruption, and grand and tragic aspirations.

"This is a simply splendid book... Marsden's writing is delightfully honed as well as being profoundly well-researched. The Levelling Sea is a microcosm of British history, contained within its covers like a ship in a bottle... Marsden takes a spyglass to the past and shows us it in vivid colour. Convincing in its detail and exciting in its sweep, this portrait of a port and its people sails deep into the reader's imagination." Philip Hoare, Sunday Telegraph

"A swashbuckling, but not unserious exploration of bravery, politics and 'fortunes...as liquid as the sea that yielded them.'' Financial Times

"Outstanding...his pitch-perfect feel for a phrase, plus a gift as sublime as James Hamilton-Paterson or Jonathan Raban's for describing water, lifts The Levelling Sea far above ordinary history towards a state closer to poetry. This is the best of our island's liquid tale, told the way it should be." Bella Bathurst, Sunday Times

"...Had Philip Marsden simply used his travel-writing skills to create a hymn to our surrounding seas, and had he decorated it with magical vocabulary alone, the book would have surely been a flawless triumph. But Mr Marsden has done a great deal more than that." Simon Winchester, We Love This Book

"The outstanding read of the season... This is a strange, absorbing story, brilliantly told... The best non-fiction expands the particular to the general, and perpetually discovers the marvellous in the ordinary. Marsden pulls this off every time... Read for a good story and beautiful, unpretentious writing. Read it for its introduction, a brilliant essay on seagoing, or for no particular reason. But read it." Marine Quarterly

`[The growth of Falmouth is] a way of exploring our relationship with the sea, and its place in history and imagination.' The Countryman

Philip Marsden is the author of `The Crossing Place: A Journey among the Armenians' (which won the Somerset Maugham Award), `The Bronski House', `The Spirit-Wrestlers: And Other Survivors of the Russian Century' (winner of the Thomas Cook Travel Book of the Year Award), `The Chains of Heaven' and `The Barefoot Emperor'. He is a fellow of the Royal Society of Literature, and his work has been translated into more than a dozen languages. He lives in Cornwall.

GOR003659089
The Levelling Sea: The Story of a Cornish Haven and the Age of Sail by Philip Marsden
Philip Marsden
Used - Very Good
Paperback
HarperCollins Publishers
2012-03-01
320
0007174543
9780007174546
N/A
Book picture is for illustrative purposes only, actual binding, cover or edition may vary.
This is a used book - there is no escaping the fact it has been read by someone else and it will show signs of wear and previous use. Overall we expect it to be in very good condition, but if you are not entirely satisfied please get in touch with us.