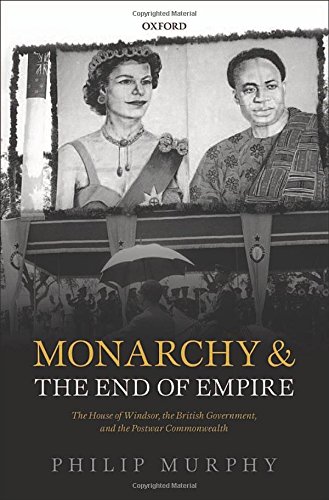 Monarchy and the End of Empire
by Philip Murphy (Director, Director, Institute of Commonwealth Studies, London)

In Stock
£47.99
Examines the relationship between the British government, the Palace, and the modern Commonwealth since 1945 and argues that the monarchy's relationship with the Commonwealth, which was initially promoted by the UK as a means of strengthening imperial ties, increasingly became an impediment to British foreign policy.
Very Good
Only 1 left

Monarchy and the End of Empire Summary

Monarchy and the End of Empire: The House of Windsor, the British Government, and the Postwar Commonwealth by Philip Murphy (Director, Director, Institute of Commonwealth Studies, London)

By the early twentieth century it was becoming clear that the Empire was falling apart. The British government promoted the Crown as a counterbalance to the forces drawing the Empire apart, but when India declared their intent to become a republic in the late 1940s, Britain had to accept that allegiance to the Crown could no longer be the common factor binding the Commonwealth together. They devised the notion of the Headship of the Commonwealth, enabling India to remain in the Commonwealth while continuing to give the monarchy a pivotal symbolic role. Monarchy and the End of Empire provides a unique insight on the triangular relationship between the British government, the Palace, and the modern Commonwealth since 1945. In the years of rapid decolonization which followed 1945 it became clear that this elaborate constitutional infrastructure posed significant problems for British foreign policy. Not only did it offer opportunities for the monarch to act without ministerial advice, it also tied the British government to what many within the UK had begun to regard as a largely redundant institution. Philip Murphy employs a large amount of previously-unpublished documentary evidence to argue that the monarchy's relationship with the Commonwealth, initially promoted by the UK as a means of strengthening Imperial ties, had increasingly become an impediment to British foreign policy.

Monarchy and the End of Empire Reviews

a carefully researched and beautifully presented book that chronicles the relationship between the monarchy, the UK government, and the decolonisation of the British Empire * Ruth Craggs, Reviews in History *
Professor Murphy's book by a country mile the most important and well-informed to have been written about the contemporary British monarchy * Peter Oborne, The Telegraph *
Philip Murphy's book makes a strong case for the importance of analysing the role, self-image, and global perception of the monarchy in any book about British politics or foreign policy in the twentieth century ... an interesting, well-written, and extremely important contribution to the fields of British royal, political, imperial, and commonwealth history. * Charlotte Lydia Riley, 20th Century British History *
splendid * Peter Boyce, American Historical Review *
This is a solidly researched and well-argued book on a neglected subject that has the additional virtue of being entertaining. It deserves a wide readership. * Wm. Roger Louis, English Historical Review *
Monarchy and the End of Empire is a traditional political study that examines in detail the dynamic relationships between and among the palace, Whitehall, and Commonwealth governments. This political focus is its greatest strength, as Murphy researches and writes this kind of history exceedingly well ... Murphy has thus provided not only a monograph that enriches and gives texture to our understanding of monarchy and Commonwealth but also one that demonstrates a need for more work on these topics, if we are to ever fully understand the process and results of decolonization. * Charles V. Reed, H-Albion *

Philip Murphy is Director of the Institute of Commonwealth Studies and Professor of British and Commonwealth History at the University of London. He graduated with a doctorate from the University of Oxford and taught at the Universities of Keele and Reading before taking up his current post. He has published extensively on twentieth century British and imperial history and the history of the British intelligence community. He is the author of Party Politics and Decolonization: The Conservative Party and British Colonial Policy in Tropical Africa 1951-1964 (1995) and Alan Lennox-Boyd: A Biography (1999), and the editor of British Documents on the End of Empire: Central Africa (2005). He is also co-editor of The Journal of Imperial and Commonwealth History.

GOR009930893
Monarchy and the End of Empire: The House of Windsor, the British Government, and the Postwar Commonwealth by Philip Murphy (Director, Director, Institute of Commonwealth Studies, London)
Philip Murphy (Director, Director, Institute of Commonwealth Studies, London)
Used - Very Good
Hardback
Oxford University Press
2013-12-05
256
0199214239
9780199214235
N/A
Book picture is for illustrative purposes only, actual binding, cover or edition may vary.
This is a used book - there is no escaping the fact it has been read by someone else and it will show signs of wear and previous use. Overall we expect it to be in very good condition, but if you are not entirely satisfied please get in touch with us.