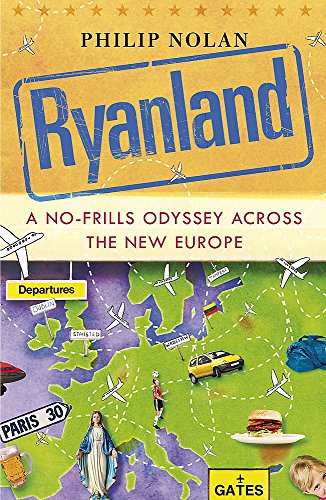 In Stock
£3.99
Around Europe on a no-frills odyssey.
Very Good
Only 2 left

Ryanland: A no-frills odyssey across the new Europe by Philip Nolan

In this hilarious, no-holds-barred account, journalist Philip Nolan packs his bag (maximum 10kg, please) and takes us on an adventure that is not for the faint-hearted as he flies with Europe 's biggest low-cost airline.

Using Ryanair destinations as a route planner, we grab our boarding passes and fight for the first available seat as we travel with him to towns we've never heard of ( Tampere and Wroclaw , anyone?) and to cities we've always wanted to visit. From watching the pilgrims completing the Camino in Santiago de Compostela to cheering with the fans in Frankfurt during the World Cup, from having his alpha waves channelled at a spa in Austria to a little soul cleansing at the baths at Lourdes, from the all-night party that is Riga to the eerie hush of Beauvais on a slow Monday night, we are treated to a kaleidoscopic snapshot of the quirks and foibles of a continent. Ryanair has opened up Europe 's treasures, and a few complete dumps too, in a way never before possible.

From Biarritz to Blackpool to Bratislava , Pau to Pisa to Porto, Vienna to Valencia to Venice , Philip Nolan completes a whirlwind tour of the continent he calls Ryanland. The journey is whimsical, wistful and laugh-out-loud funny, as we travel on a spellbinding no-frills odyssey.

Philip Nolan was born in Dublin in 1963. An award-winning travel writer, he has also worked for most Irish national newspapers, including the Sunday World, Sunday Press, Sunday Tribune and Evening Herald, and was deputy editor of Ireland on Sunday.

GOR001122610
Ryanland: A no-frills odyssey across the new Europe by Philip Nolan
Philip Nolan
Used - Very Good
Paperback
Hachette Books Ireland
2007-04-04
288
0340935936
9780340935934
N/A
Book picture is for illustrative purposes only, actual binding, cover or edition may vary.
This is a used book - there is no escaping the fact it has been read by someone else and it will show signs of wear and previous use. Overall we expect it to be in very good condition, but if you are not entirely satisfied please get in touch with us.