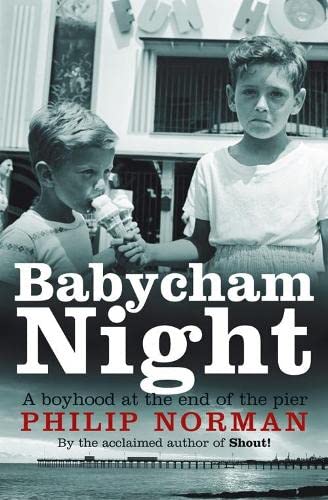 Babycham Night: A Boyhood At The End Of The Pier by Philip Norman

Philip Norman's family considered themselves genteel yet somehow became involved in the opportunistic world of seaside trade on the Isle of Wight. With masterly skill, Norman recreates his upbringing among this gallery of social misfits - his handsome but unstable father Clive, once a dashing RAF officer, now a reluctant showman at the end of Ryde Pier, his pub-owning Uncle Phil, who dresses as a woman every New Year's Eve, and his irresistible Grandma Norman who presides over her rock kiosk and rules the troubled family like a Mafia don. The year is 1953. While Britain celebrates the coronation, ten-year-old Philip watches disaster approach in his father's obsession with Joan, the Bronze Medal roller skating champion. Finally, he concocts a stratagem to win his parents' attention which explodes spectacularly in his face . . . Funny and poignant, Babycham Night evokes the joys and heartache of childhood, and takes the reader on a nostalgic trip back to a lost era, when the Isle of Wight was an exotic holiday location and Babycham the height of sophistication.

'Beautifully written . . . so vivid you can taste the teacakes' Time Out

Philip Norman is the author of Shout!, a biography of the Beatles, as well as The Stones on the Rolling Stones and definitive lives of Elton John and Buddy Holly. He writes regularly for the Sunday Times.

GOR000661632
Babycham Night: A Boyhood At The End Of The Pier by Philip Norman
Philip Norman
Used - Very Good
Paperback
Pan Macmillan
2004-05-07
352
0330480561
9780330480567
N/A
Book picture is for illustrative purposes only, actual binding, cover or edition may vary.
This is a used book - there is no escaping the fact it has been read by someone else and it will show signs of wear and previous use. Overall we expect it to be in very good condition, but if you are not entirely satisfied please get in touch with us.