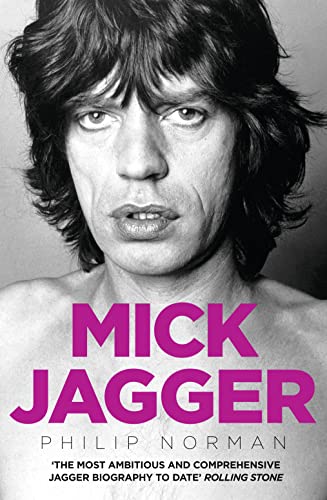 A miracle of still-plentiful hair, raw sex-appeal, and strutting talent . The frontman of one of the most influential and controversial groups of all time. A musical genius with a career spanning over four decades. He is a testament to British glamour, the ultimate architect and demi-god of rock.

A miracle of still-plentiful hair, raw sex-appeal, and strutting talent . The frontman of one of the most influential and controversial groups of all time. A musical genius with a career spanning over four decades. He is a testament to British glamour, the ultimate architect and demi-god of rock.

Bestselling biographer Philip Norman offers an unparalleled account of the life of a living legend, Mick Jagger. From Home Counties schoolboy, to rebel without a cause to Sixties rock sensation and global idol, Norman unravels with astonishing intimacy the myth of the inimitable frontman of The Rolling Stones. MICK JAGGER charts his extraordinary journey through scandal-ridden conspiracy, infamous prison spell, hordes of female admirers and a knighthood while stripping away the colossal fame, wealth and idolatry to reveal a story of talent and promise unfulfilled.

Understated yet ostentatious; the ultimate incarnation of modern man's favourite fantasy: 'sex, drugs and rock 'n' roll', yet blessed with taste and intelligence; a social chameleon who couldn't blend in if he tried; always moving with the Jagger swagger yet modest enough to be self-deprecating, Mick was a paradoxical energy that reconfigured the musical landscape.

This revelatory tour de force is ample tribute to a flawed genius, a Casanova, an Antichrist and a god who, with characteristic nonchalance realised the dreams of thousands of current contenders and rocker pretenders, longevity, while coasting on a sea of fur rugs.

`Commendable thoroughness, engaging wit and boundless energy, much as Jagger has shown over the decades' Mail on Sunday

`The most ambitious and comprehensive Jagger biography to date' Rolling Stone

`Barnstorming...Norman has ploughed this terrain for much of his career, and brings to his subject both a deep fascination with the ecology of rock'n'roll plus a sharp eye for its absurdities' The Observer

`Norman's book reads like a thrill ride. He captures as well as anybody that magical combination of youth, talent and low rent that would eventually become the Rolling Stones' The New York Times

Philip Norman was born in London and brought up on the Isle of Wight. He joined the Sunday Times at the age of twenty-two, soon gaining a reputation as Atticus columnist and for his profiles of figures as diverse as Elizabeth Taylor, P. G. Wodehouse and Colonel Gaddafi. In 1981 he published SHOUT!, a ground-breaking biography of the Beatles, a bestseller in both Britain and the US. He has also written the definitive lives of Sir Elton John and Buddy Holly and his journalism has been published in three collections. He is married with a daughter and lives in London.

GOR004716201
Mick Jagger by Philip Norman
Philip Norman
Used - Very Good
Paperback
HarperCollins Publishers
2013-04-11
640
0007329512
9780007329519
N/A
Book picture is for illustrative purposes only, actual binding, cover or edition may vary.
This is a used book - there is no escaping the fact it has been read by someone else and it will show signs of wear and previous use. Overall we expect it to be in very good condition, but if you are not entirely satisfied please get in touch with us.