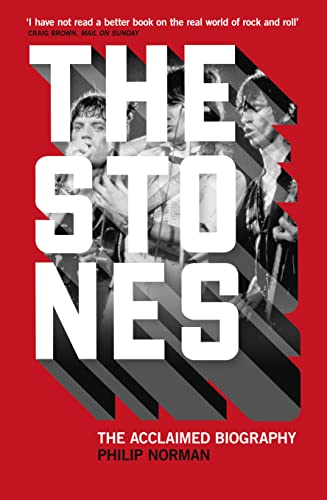 The Stones
by Philip Norman

In 2012 the Rolling Stones celebrate their 50th anniversary. Their story - the band's meteoric rise to fame, the Marianne Faithfull, Brian Jones and Altamont scandals, the groundbreaking hits - is the stuff of twentieth century legend, and core to popular culture.

The Stones: The Acclaimed Biography by Philip Norman

In 2012 the Rolling Stones celebrate their 50th anniversary. Their story - the band's meteoric rise to fame, the Marianne Faithfull, Brian Jones and Altamont scandals, the groundbreaking hits - is the stuff of twentieth century legend, and core to popular culture.

But it is Norman's skills as a researcher and biographer which bring a whole new dimension to such a story. Written with the personal knowledge, trust and co-operation of the participants, this fully updated version is indisputably the best book on The Stones ever written.

Norman spares no detail, covering the Jerry Hall/Mick Jagger split and the Stones' lives as tax exiles, the recording of Exile on Main St. as well as the iconic stage performances, Mick's control of the band's affairs and his contractual disputes with managers and promoters.

This a story of fame, money, drugs, booze, sex, hedonism and the greatest rock band of all time.

'An elegiac book, a record of evanescence as much as of durability, and it reminds us of an epoch that threw up lions with no more energy than it threw out losers'
The Times

`Wonderfully unravels the social history of that extraordinary time, and does not pull any punches'
Daily Telegraph

`Details their amazing career and lifestyle...After reading this account one cannot help but marvel that they have survived'
Daily Express

`Read it as a cautionary tale of success becoming excess...read it through a haze of nostalgia that will send you back to the early indifferently produced LPs - and the singles whose power derives from the simplest riffs and the most indelible memories of the Sixties. But read it'
John Walsh in Books and Bookmen

Philip Norman was born in London and brought up on the Isle of Wight. He joined the Sunday Times at the age of twenty-two, soon gaining a reputation as Atticus columnist and for his profiles of figures as diverse as Elizabeth Taylor, P. G. Wodehouse and Colonel Gaddafi. In 1981 he published SHOUT!, a ground-breaking biography of the Beatles, a bestseller in both Britain and the US. He has also written the definitive lives of Sir Elton John and Buddy Holly and his journalism has been published in three collections. He is married with a daughter and lives in London.

GOR004715105
The Stones: The Acclaimed Biography by Philip Norman
Philip Norman
Used - Very Good
Paperback
HarperCollins Publishers
2012-10-04
544
0007477066
9780007477067
N/A
Book picture is for illustrative purposes only, actual binding, cover or edition may vary.
This is a used book - there is no escaping the fact it has been read by someone else and it will show signs of wear and previous use. Overall we expect it to be in very good condition, but if you are not entirely satisfied please get in touch with us.