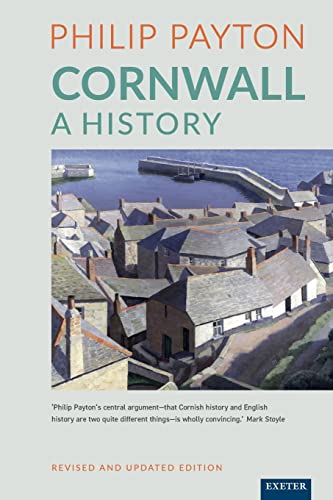 Cornwall: A History
by Philip Payton

A new edition of Philip Payton's modern classic Cornwall: A History, published now by University of Exeter Press, telling the story of Cornwall from earliest times to the present day. This edition incorporates the latest research and brings the story of Cornwall right up to date, examining the events and debates of the early twenty-first century.

Cornwall: A History: Revised and updated edition by Philip Payton

A new edition of Philip Payton's modern classic Cornwall: A History, published now by University of Exeter Press, telling the story of Cornwall from earliest times to the present day.

Drawing upon a wide range of original and secondary sources, it begins with Cornwall's geology and prehistory, moving through Celtic times to the creation of the kingdom of Kernow and its relationship with neighbouring England. The political accommodation of medieval Cornwall by the expanding English state through the twin institutions of the Duchy and Stannaries is examined, as is the flowering in the middle ages of literature in the Cornish language. Resistance to English intrusion - in the rebellions of 1497 and 1549 and in the Civil War - is explored.So too is Cornwall's role in the subsequent expansion of Britain's global influence, and Cornwall as an early centre of the industrial revolution is also discussed.

Mining and Methodism became twin strands of an assertive transnational identity which emigrant Cornish transplanted across the globe in the nineteenth-century. Thereafter, as the book shows, a vigorous Celtic revivalist movement championed the rebirth of the Cornish language and Cornwall's status as a Celtic nation. At the same time, tourism, with its emphasis on Cornish distinctiveness, moved in the twentieth century to fill the gap left by the decline of mining.

The book concludes by examining the nature of twenty-first century Cornwall, contrasting an apparent heightening of Cornish consciousness with the increasing threats to Cornwall's environment and identity.

Philip Payton is the leader of a new generation of historians exploring Cornwall's ambivalent position within the English state, and questioning the view of Cornwall as 'just another English county'. In this book he argues the case for the Cornish as a separate Celtic people, fully deserving a history of their own, and amply succeeds in his stated aim of bringing that history to the widest possible audience. * Professor Mark Stoyle, University of Southampton *
[. . .] a new edition of Cornwall: A History is very welcome indeed. It is a key text for anyone working on the history of the Celtic nations, peoples and languages and a very valuable addition to the literature on modern British history. * Professor Christopher Williams, Cardiff University *
from reviews of the 1996 edition: Will rank among the classic books on Cornwall, if not the finest ever published. * Western Morning News *
Payton brilliantly brings together myth, fact, people, places, events...gripping. * The Times *
Awesomely researched... the essential book for anyone who loves the county. * The Observer *
One of the most comprehensive studies (by one of the most learned scholars) of Cornwall and the nature of Cornish identity ever undertaken. * Cornwall Today *

Philip Payton is Emeritus Professor in the University of Exeter and Professor of History at Flinders University in Adelaide, Australia, and is the former Director of the Institute of Cornish Studies in the University of Exeter. He edited Cornish Studies, published annually from 1993-2013, the only series of publications that seeks to investigate and understand the complex nature of Cornish identity, as well as to discuss its implications for society and governance in contemporary Cornwall. He has written extensively on Cornish topics, and recent books include A.L. Rowse and Cornwall: A Paradoxical Patriot (2005), Making Moonta: The Invention of Australia's Little Cornwall (2007), John Betjeman and Cornwall: `The Celebrated Cornish Nationalist' (2010), and (edited with Alston Kennerley and Helen Doe), The Maritime History of Cornwall (2014). He has recently been awarded South Australian Historian of the Year 2017 by the History Council of South Australia.

Foreword Introduction Ancient Stones The Mystery of the Celts From Dumnonia to Cornubia Anglia and Cornubia `We Utterly Refuse... This New English' `These is Much Danger in a Cornish Hugg' `The Large Continent of Cornwall' `So Many Brilliant Ornaments' `If You Haven't Been to Moonta' Re-Inventing Kernow Whither Cornwall? Notes and References Index

GOR009937907
Cornwall: A History: Revised and updated edition by Philip Payton
Philip Payton
Used - Very Good
Paperback
University of Exeter Press
2017-12-31
392
0859890279
9780859890274
Nominated for Gorsedh Kernow's Holyer an Gof Publishers' Awards nomination 2018 (UK)
Book picture is for illustrative purposes only, actual binding, cover or edition may vary.
This is a used book - there is no escaping the fact it has been read by someone else and it will show signs of wear and previous use. Overall we expect it to be in very good condition, but if you are not entirely satisfied please get in touch with us.