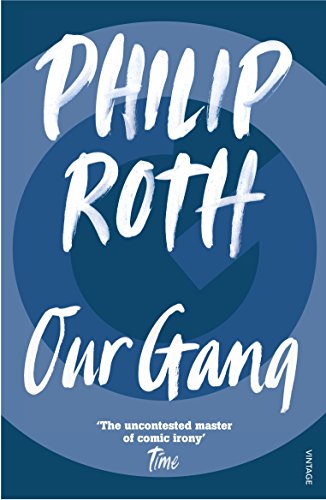 Our Gang
by Philip Roth

Our Gang: Starring Trick and His Friends by Philip Roth

'Disturbing, logical and very funny... In short, a masterpiece' New York Times Book Review A ferocious political satire in the great tradition of Jonathan Swift and Mark Twain, Our Gang is Philip Roth's brilliantly acerbic response to the phenomenon of Richard M. Nixon. In the character of Trick E. Dixon, Roth portrays an American president who outdoes the severest cynic; a peace-loving Quaker and believer in the sanctity of human life who doesn't have a problem with killing unarmed women and children. A master politician with an honest sneer, he finds himself battling the Boy Scouts, declaring war on pro-pornography Denmark, all the time trusting in the basic indifference of the voting public. Tricky is the unprincipled self-seeker who hides his heartlessness behind the anaesthetising cliches of high office, whose public language is a merciless parody of that 'candid' Presidential prose which is merely double-talk, or as Orwell put it, 'pure wind'.

"The uncontested master of comic irony" * Time *
"Very funny - I laughed out loud sixteen times and giggle internally a statistically unverifiable amount. In short, a masterpiece... I cant think of anything like it" * New York Times *
"A bitter yet hilarious lampoon...a remarkable display of satiric vehemence. An extremely (in every sense) funny, nail-bitingly anxious work" * Financial Times *
"When Philip Roth sends Richard Nixon to hell in Our Gang, there is delight in recognising that if there is a hell, Nixon will probably act there just as Roth describes him" * Washington Post *
"Perhaps the funniest and most complex exercise in sustained political satire since Animal Farm" * Newsweek *

GOR001137553
Our Gang: Starring Trick and His Friends by Philip Roth
Philip Roth
Used - Very Good
Paperback
Vintage Publishing
1994-11-03
208
0099389118
9780099389118
N/A
Book picture is for illustrative purposes only, actual binding, cover or edition may vary.
This is a used book - there is no escaping the fact it has been read by someone else and it will show signs of wear and previous use. Overall we expect it to be in very good condition, but if you are not entirely satisfied please get in touch with us.