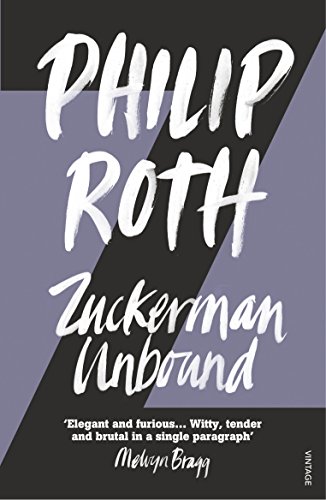 In Stock
£3.59
Following the wild success of his novel, Carnovsky, Nathan Zuckerman has been catapulted into the literary limelight. As he ventures out onto the streets of Manhattan he finds himself accosted on all sides, the target of admonishers, advisers, would-be literary critics, and - worst of all - fans.
Very Good Good
Only 2 left

Following the wild success of his novel, Carnovsky, Nathan Zuckerman has been catapulted into the literary limelight. As he ventures out onto the streets of Manhattan he finds himself accosted on all sides, the target of admonishers, advisers, would-be literary critics, and - worst of all - fans. An incompetent celebrity, ill at ease with his newfound fame, and unsure of how to live up to his fictional creation's notoriety, Zuckerman flounders his way through a high-profile affair, the disintegration of his family life, and fends off the attentions of his most tenacious fan yet, as the turbulent decade of the sixties draws to a close around him. But beneath the uneasy glamour are the spectres of the recently murdered Robert Kennedy and Martin Luther King, Jr., and an unsettled Zuckerman feels himself watched...

"Elegant and furious... Witty, tender and brutal in a single paragraph" -- Melvyn Bragg
"It is a) funny, b) sparkling prose, c) to-the-point short, d) genuinely moving." * Financial Times *
"A comic stroll in a hall of mirrors" * Newsweek *
"Masterful" * New York Times Book Review *
"It was bold of Roth to write a novel about being famous...a comic stroll in the hall of mirrors" * Newsweek *

GOR002638437
Zuckerman Unbound by Philip Roth
Philip Roth
Used - Very Good
Paperback
Vintage Publishing
2005-06-02
240
0099477564
9780099477563
N/A
Book picture is for illustrative purposes only, actual binding, cover or edition may vary.
This is a used book - there is no escaping the fact it has been read by someone else and it will show signs of wear and previous use. Overall we expect it to be in very good condition, but if you are not entirely satisfied please get in touch with us.