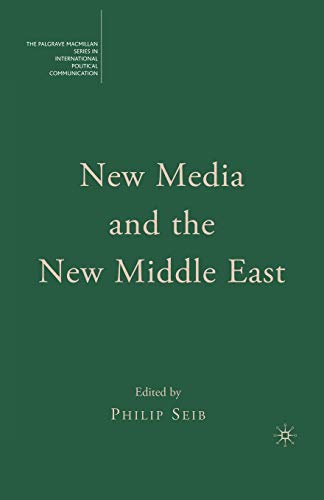 New Media and the New Middle East
by Philip Seib

In Stock
£8.49
In this book, leading international scholars examine the way new media is reshaping lives and politics. Covering topics from women's rights to terrorism, and countries from Israel to Saudi Arabia, these authors explore the global and regional ramifications of the proliferation of communication technologies and the information they disseminate.
Very Good
Only 1 left

New Media and the New Middle East by Philip Seib

In this book, leading international scholars examine the way new media is reshaping lives and politics. Covering topics from women's rights to terrorism, and countries from Israel to Saudi Arabia, these authors explore the global and regional ramifications of the proliferation of communication technologies and the information they disseminate.

"This collection is a 'must have' for any graduate student or researcher interested in social movements, area studies, media and communication studies, sociology, and political science. It provides a wide range of scholarly discussions and debates, and presents not just the obvious issues facing the Middle East, but teases out the nuances and the subtle complexities facing any modern society. This edited volume offers a compelling case for ensuring all the world's citizens have access to information technologies." - Media, War& Conflict

"This volume makes an important step in establishing the current state of Middle Eastern new media and advances some arguments concerning this media's credibility and use in resistance and conflict situations, thereby paving the way for future books to examine more in-depth these issues of change."

- Journal of Arab and Muslim Media Research "There are many reasons to commend Professor Seib's new book to media students and scholars, especially those with an interest in the Middle East. New Media and the New Middle East is a descriptive title; the chapters do not rehash the well-worn past of media in this important area of the world. The editor, who crafts the first chapter, has taken pains to attract for his publication writers who are young scholars: Ibrahim Saleh, Sahar Khamis, Mohammed el-Nawawy, and Ahmed El Gody, to name a few. These are well-trained scholars who through this book will help shape the research agenda for the first decade of the 21st Century in the Middle East."

- Douglas A. Boyd, University of Kentucky "A superb collection of essays about timely and developing debates on Arab and Middle Eastern media. In a region thriving with unprecedented growth in satellite channels and internet expansion, Philip Seib's book makes a major contribution to understand the crucial role of the media in that region, especially in the wake of the invasion of Iraq in 2003 and ensuing events. A book waiting to be read."

- Noureddine Miladi, University of Northampton, and the Centre for Arab& Muslim Media Research (CAMMRO), UK "An interesting addition to the scholarship on Arab media." - European Journal of Communication

PHILIP SEIB is Professor of Journalism and Public Diplomacy at the University of Southern California, USA.

GOR009935251
New Media and the New Middle East by Philip Seib
Philip Seib
The Palgrave Macmillan Series in International Political Communication
Used - Very Good
Paperback
Palgrave Macmillan
2009-09-17
263
0230619231
9780230619234
N/A
Book picture is for illustrative purposes only, actual binding, cover or edition may vary.
This is a used book - there is no escaping the fact it has been read by someone else and it will show signs of wear and previous use. Overall we expect it to be in very good condition, but if you are not entirely satisfied please get in touch with us.