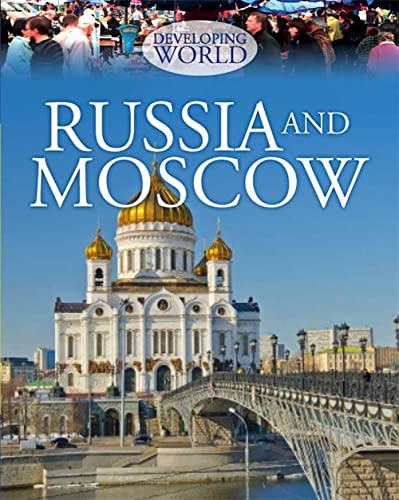 In Stock
£12.99
An important, high-end geography series that takes an in-depth look at some of fastest-developing countries and cities in the world.
Very Good Good
Only 2 left

A high-end geography series that explores some of the fastest-developing countries and cities in the world and assesses how they are dealing with the challenges of the 21st century. Topics looked at include: population structure, the economy, environmental sustainability and the outlook for the future. Each title also features a closer look at an individual city within the country.

Russia is more prosperous now than at any time in its history, with new wealth based on its rich natural resources. This new era of prosperity is reflected in Russia's capital city, Moscow. But uniting a vast and disparate population, tackling crime rates and finding political accord are some of the challenges that Russia faces if it is to continue to grow and develop as an economic power.

Philip Steele is a leading writer of children's non-fiction books. He was born in Surrey, graduated from University College Durham and worked in London publishing houses. He then freelanced as a project manager, publishing consultant and author. He has written a wide range of books for Wayland, Watts, Dorling Kindersley, Kingfisher/Macmillan, Walker Books and many other publishers worldwide. History, biography, lands and peoples, the natural world, current affairs and social issues all feature prominently in his backlist. Philip has backpacked around Africa, Europe, Asia, North America and Australia. For many years he has been settled very happily amidst the mountains, beaches and green fields of North Wales. His wife (as a teacher) and his teenage daughter (as a secondary school pupil) are ideally suited to cast a critical eye over his work!

GOR009972113
Developing World: Russia and Moscow by Philip Steele
Philip Steele
Developing World
Used - Very Good
Hardback
Hachette Children's Group
2013-09-26
48
1445123622
9781445123622
N/A
Book picture is for illustrative purposes only, actual binding, cover or edition may vary.
This is a used book - there is no escaping the fact it has been read by someone else and it will show signs of wear and previous use. Overall we expect it to be in very good condition, but if you are not entirely satisfied please get in touch with us.